Across the street from where I work there is a building being constructed. I have watched them set up the large cranes and start laying down each floor of the building. It is still going up and I don’t know where it will stop. 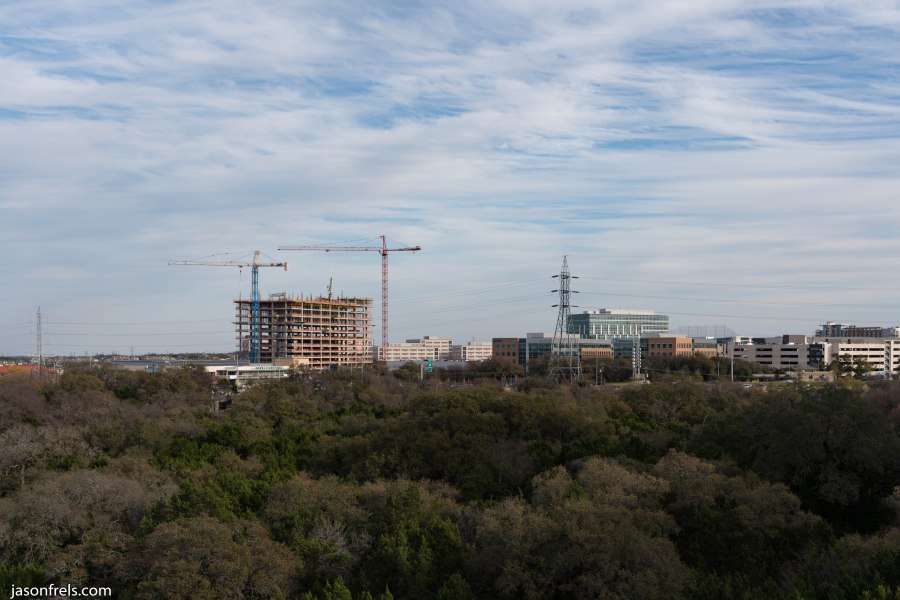 I thought that it might be fun to take some pictures up close to the naked structure and make sort of a busy picture reticulated by the structure. As luck would have it, there is a parking garage that faces the new building on the side that receives the afternoon sun, so I headed over there at about 5:00 PM after spilling coffee in my lap.

This picture was taken with a Rokinon 14mm lens (the day before the picture above). It was hard to get an image that isn’t distorted in some way with this lens, but I was able to do a bit of work in Lightroom to account for the horizontal and vertical distortion of such a wide angle. This lens has an angle of view of 114° and there is some distortion, especially at the corners. Also, such a wide angle lens really compresses items in the distance. 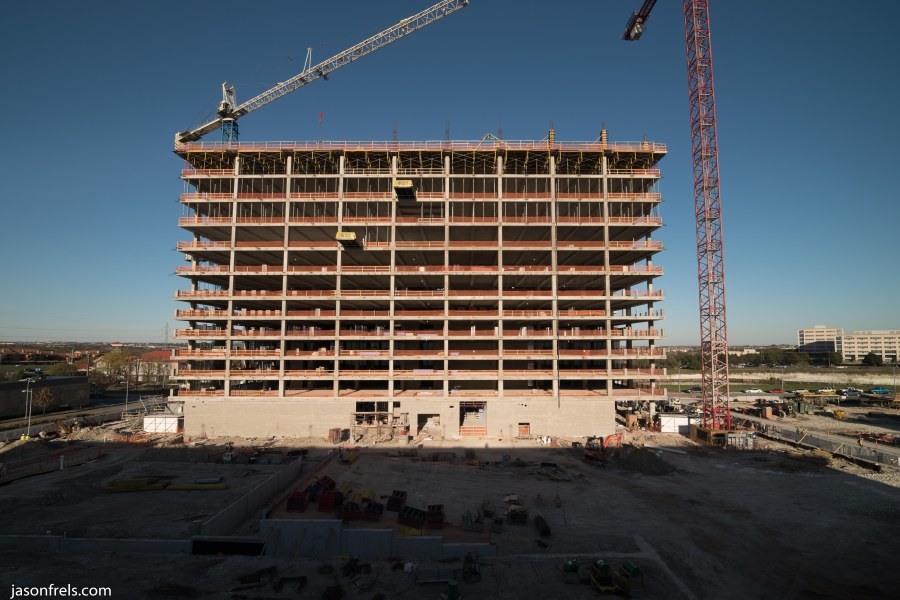 I also shot it with my 24-120mm lens and left enough room to crop so that I could adjust the perspective to make a rectangular grid. This is what I had in mind for an interesting, busy composition based on this building. 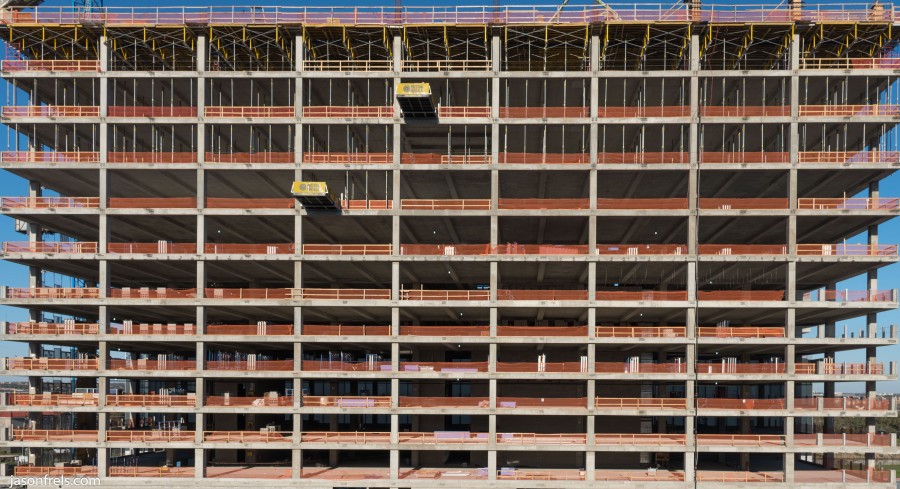 I took this after most of the workers had left for the day. Perhaps earlier in the day there would have been more activity to for a more interesting photo. But it does show the level of work completed from bottom to top. I have no idea what this building will be used for. They have started putting glass on the outside around the other side of the building.

Up on this parking deck, there were lots of birds, grackles in particular, and they were not very worried about me. So, I shot some pictures of these birds. The autofocus had a pretty easy time getting the bird in focus, so I didn’t have to work too hard for the shots. The below shot is of a female grackle that seemed to enjoy being photographed. It’s a shame that I didn’t have my 200mm lens with me, but the pictures at 120mm aren’t too bad. 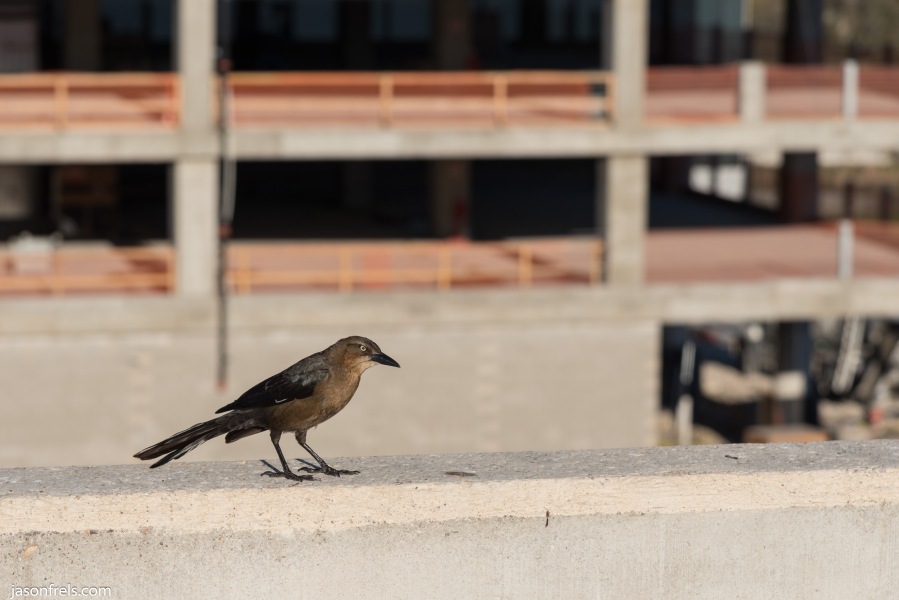 You needn’t worry about grackles going extinct. Texas seems to have millions of these loud birds year-round. You can see great flocks of them flying over the city especially in the late afternoon. My yard is often full of them and they can drain a bird-feeder in no time.

Something else that I have wanted to try since I got the 14mm lens, is compare a picture taken at 14mm with a panorama of the same scene taken with 50mm. I wanted to do this to try to understand the compression that occurs with distant objects using the 14mm lens. And 50mm is generally considered to be equivalent to how humans see the world.

The image below was shot with the Rokinon 14mm lens. I did have to straighten and crop it a bit. You can see how much larger the trees in the foreground are to the buildings in the distant background. 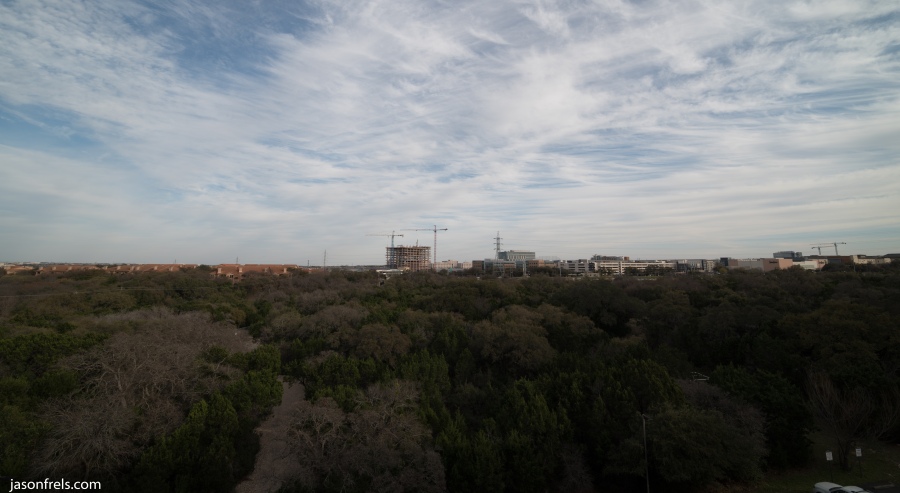 The next image below is a panorama stitch of 21 images taken at 50mm focal length. I didn’t get all of the sky that the 14mm got, so I cropped the 14mm shot down a bit. It may not be a perfect overlay of the same scene, but it does cover the same stretch of horizon. This illustrates how the 14mm focal length warps perspective compared to the 50mm focal length. The buildings across the highway are compressed and seem much smaller in the image shot with the 14mm lens.

Well, that was a Wednesday and Thursday afternoon of fun. I have been watching this building every day as I can see it from my desk at work. It would have been a fun project to do a time-lapse over weeks and months, but that is long time to leave a camera set up. Thanks for reading.