In portrait class three we studied full length portraits and lighting. There was also a lot of discussion about hand orientation, leg position, and feet placement. There was a lot to keep in your head at once, while also trying to focus and frame the photo and communicate with the model.

The below full length photo is from early in the session. There is a flash to the model’s left and a fill flash behind the photographer to keep the shadows from getting too deep. I think that the fill flash was set to about 2 stops less than the side flash. Some important points about this pose:

The concept of keeping the sides of the hands facing the camera is that if the back or front of the hand is broadly facing the camera, it will draw the eye and take away from the main focus of the photo: the face. The theory being that a person’s eyes are drawn to skin in the photo and would naturally go to the broad side of the hands. I think that when viewing a photo of a person, my eyes first naturally go to the eyes.

Next we focused on a profile photo in which the model is facing 90 degrees away from the camera. The flash is moved so that the lighting on the model’s face is still the same side lighting as before. In the below photo, the parts of the model’s face looking to the left are brightly lit, where as the side of the face is more in shadow giving depth and detail to the subject. The model’s hair is also subtly lit from above and behind. 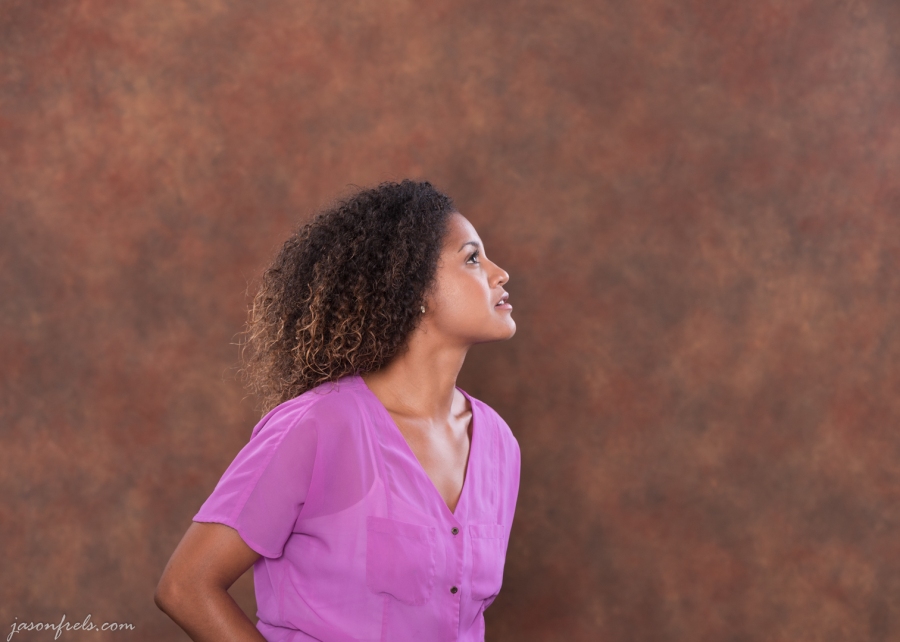 The above photo was shot at 122mm and f/5 and there is not much background blur. The background is already very soft, so I don’t think that matters much. In framing, I was trying to keep in mind that the model needed some space to the right because she is looking in that direction, so I framed her off-center.

Next, the model was laying on the floor, which means that I was down on the floor as well to shoot on her level.

Key things to worry about with this pose are watching the hands and feet. We don’t want to show the bottoms of a person’s feet because the detract from the subject of the image. And we have to be careful when the hands are near the face, as they can detract from the subject’s face. Also, the model’s front leg is bent forward with her foot behind her to give her a more feminine shape while in this position. 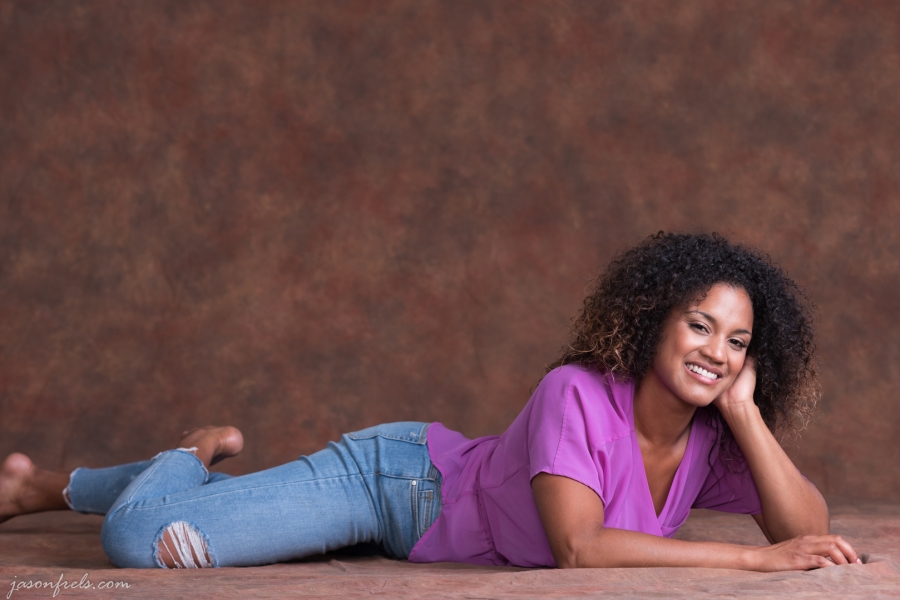 You can see in the photo above that the model’s face is side lit to show depth and her left hand, while near her face, is mostly hidden and not distracting. I think that I liked this pose the best for a female as it was quite flattering. I find the standing portraits to be a bit awkward.

Below is a photo of the room set-up. Just a quick photo that I took from behind my daughter while she was shooting to show the environment.

My daughter is wearing my hoodie, which is now her hoodie. It’s amazing how many hoodies I have purchased for myself over the years that I no longer have. I hide one at work that they don’t know about.

The photos in this blog have had minimal post-processing. I generally set a good white balance, lens correction, and camera profile and then copied that to all of the images. I then adjusted exposure as needed.

Along with this class, it would be ideal if I could practice on my own but I have none of this lighting equipment. I probably would if I was going to become a serious portrait photographer. I am still getting a lot out of this class about photographing people.