As I mentioned in a previous post, I went to Lost Maples State Natural Area to go hiking and shooting astrophotography. It was a moonless night, it was supposed to be clear, and I wanted to find a nice dark place to take sky pictures. I decided on a hike-in primitive campsite up on a ridge as I thought that it would have a nice view of the sky. The image below shows the trails map of the park. I parked where Parking label is near the Trail to Day Use Area, I then put on my pack and hiked up to Primitive Campsite B (see the map below).

The first mile of trail was not bad, but the part where it says “steep” is a climb to the top of the ridge along a trail covered with loose rocks. I was carrying a tent, inflatable mattress, camera, tripod, a lot of water, etc. on my back and I had to stop and rest several times. But, I made it to the campsite and got set up by 7:00PM. I found that I had the entire campsite to myself, which I kind of liked. 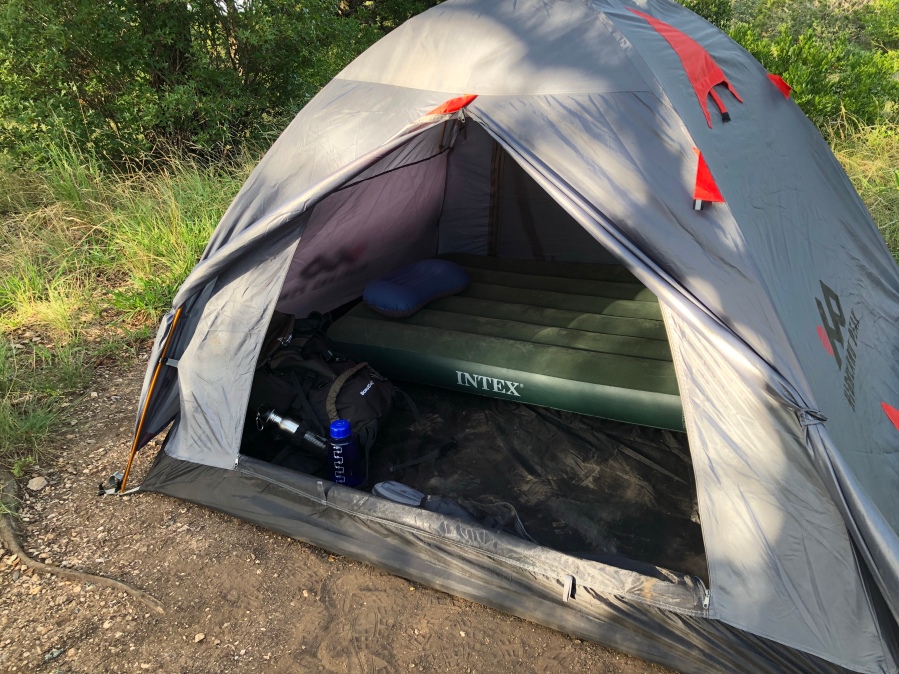 I hiked around a bit, took pictures, planned out where I would be when it was dark and went to bed just after sunset. I set my alarm for 12:00AM as that is when the galactic core should be up in the sky to the South. When I woke up and looked at the sky outside, the Milky Way was clearly visible to the unaided eye and I got excited to take some pictures.

I put on my headlamp and used my flashlight to walk down to the edge of the cliff. I wanted to make sure that I stayed at least a couple of meters from the edge in the dark. I set up my tripod and camera and found that Mars was so bright that I could use it to set focus using live-view zoom.

In the image below, you can see the galactic core in the sky with Mars the bright planet to the left. There was just a hint of clouds on the horizon, but they were starting to build. I could barely see the lights on the distant horizon, but the camera could and I was pretty high up. There is also a hint of light in the valley, I think where my car is parked.

I found that I was generally having good results using ISO3200. I tried exposures of 20 -30 seconds as a 14mm focal length should allow me to do this without the stars running noticeably. I also flipped the camera to portrait mode in an attempt to get more of the galaxy in the image.

The dense galactic core really showed up well thanks to the dark clear night I was having. I also took time to just sit and look at the sky as this is not something that I can see in the metro-area where I live. I eventually moved over to a park bench on the trail and recomposed the galaxy with some trees in the foreground.

You can see that in addition to Mars to the left, Jupiter is also very bright to the right near the horizon. And Saturn is between them in the midst of the Milky Way. The clouds were building at this point; you can see the light from Leakey reflecting off them on the horizon.

I decided to set the camera up behind me and take a picture with me staring at the night sky. It was just going to be a fun picture to show people but this turned out to be my favorite picture as it really captures what I was feeling that night with the solitude and the beauty of the universe set before me.

It is probably the only selfie I will do this year and I think I look pretty good when it is so dark that you can’t see me. I also took the obligatory glowing tent photo and then went back to bed.

Those were my best night sky photos. I feel good about the night I had and I accomplished my main objective. I would like to try again and perhaps find a place with some interesting foreground to create some interesting compositions. The galaxy should be here from several more billion years, so I should have another chance.

I would like to go over the tools and techniques that I used in making the above photos. First, the gear. The night sky is so dim that it really requires a camera with a sizable sensor and a wide aperture lens to get good results. The larger the sensor, the more light is available for the same amount of megapixels. My camera has a full-frame, 24MP sensor, but you can also get decent results with an APS-C sensor DSLR with a good sensor.

Also, the wider the base aperture of the lens is, the more light you can get to your sensor. You probably want f/2.8 or better to avoid having to use extremely high ISO. I purchased this Rokinon 14mm, f/2.4 lens mainly with astrophotography in mind. I got pretty good results at ISO3200 with this lens. There are better and more expensive lenses available for more money.

You probably want a lens that has a focal length of 24mm (full-frame equivalent) or less to capture enough of the sky. Also, the wider angle the lens, the longer you can expose without noticeable star trails.

You also need a tripod and remote shutter release to reduce camera shake. My camera gear is pictured below.

The settings I started with were:

I then had to adjust the camera to the composition I wanted based on test shots as it was too dark to see in live view. I then experimented with different shutter speeds and ISO settings.

I hope this was interesting. Please leave comments, suggestions, or questions below. Thanks.

16 thoughts on “Shooting the Milky Way”