Big Bend National Park is almost entirely a dark sky site with almost no light pollution. For this reason, I chose to get out to the park on a clear moonless night before summer ended. I have been to other sights with very little light pollution, like Lost Maples State Natural Area, but none as dark as Big Bend. So, I watched the forecast for a couple of weeks, planning my road trip to the park. At first, the forecast called for clear skies on the night that I wanted to go, and then for cloudy skies. But then, the day before I went, the forecast cleared up, so I got in the car on Saturday morning and started driving west.

At twilight, I decided upon an overlook called Sotol Vista as it is a high place that looks south. When I arrived, I quickly grew excited as I could clearly see the Milky Way in the sky even though it was still twilight and there was still plenty of light and the setting moon in the western sky. Below is one of my first photos taken at twilight, 8:20PM.

This overlook is called Sotol Vista and sotol is the Spanish name for the desert plant that you can see sticking up through the bottom of my photo. I eventually decided that I didn’t like this in my frame, so I moved, and sat and waited for dark-dark as the few clouds kindly blew away to clear my view. I sat and just looked at the sky, not my phone, as I wanted my eyes to adjust to the dark. I saw a few meteors and some satellites and the Milky Way grew steadily brighter. To say that I was amazed would not be misusing the word as is commonly done these days.

Below is one of my photos taken at 10:41 PM after twilight had ended. A mile or so south from this vista is Northern Mexico and if you look on a map you will find that it is mostly unpopulated desert, providing me with a dark horizon, free of light pollution.

I shot this with a 20mm f/1.8 lens with a 15 second exposure and ISO3200. It was easy to manually focus on Jupiter using live view. Jupiter is the bright star just right of the galactic arm. Saturn is up and to the left of the galactic arm and not quite as bright as Jupiter. I barely had to process this in LightRoom as the sky exposed so well without any light pollution haze. If you look to the corners and edges of the photo, you can see that the stars are a little distorted. This is what is expected when the lens is wide open, but that lets in the most light per second.

Sitting and looking at the sky, I could finally see why the ancients called it the Milky Way. It truly does look like a stream of milk across the sky. I could actually see the tendrils of galactic dust clouds that show up in these pictures. This was the darkest sky I have ever seen as an adult, being a city dweller for my adult life. I think if I had been here with another person, they probably would have quickly grown bored sitting and staring at the stars for hours, so I was kind of glad to be alone to enjoy the sky and solitude.

It was so dark, that I thought that the landscape being totally black might be a problem. So I devised to take a long exposure to capture some of the star-lit landscape with the plan to combine it with the sky exposure in PhotoShop. Below you can see my first exposure for the stars, taken with 14mm, f/2.4, 25 seconds, ISO3200. Next to it is my second exposure for the landscape lit only by star light, taken with 14mm, f/2.4, 4 minutes, ISO3200. 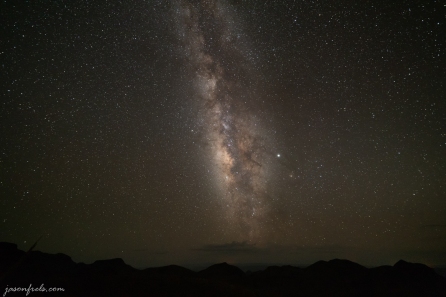 I timed the second exposure using a timer on my phone with the camera in bulb mode, controlled by a remote. With long exposure noise reduction, it took 8 minutes to shoot the last picture. This is also a terrific way to drain the camera battery.

When I got home, I applied a lens correction filter in LightRoom and opened the two images as layers in PhotoShop. I then tediously created and adjusted a mask across the landscape at the lower part of the image and put an exposure control layer over that to try to make it look somewhat realistic. Below is my result.

I am not thoroughly pleased with the result. I think it looks a bit fake and my PhotoShop skills leave something to be desired. But it was an interesting exercise. What do you think?

After changing my battery, I also attempted a selfie photo, which is something that I seldom do. I positioned the camera behind my chair and spent a few shots framing it in. I placed my headlamp facing down on the ground under the tripod to get a small amount of light on me. I then triggered the camera with the remote and sat as still as I could for 15 seconds while looking at the sky.

In hindsight, the chair looks kind of odd in the photo. Perhaps I should have just been standing. Not a great picture, but a fun picture.

Lastly, I tried to get a little something silhouetted in the foreground. There is a tree at the overlook that I tried to work in to the frame. I got the tripod down very low behind the tree to look up at the sky from the ground behind it. I exported this image twice the normal size that I use so you can see the details.

Perhaps I could have gotten closer to the tree to get more of it against the sky. It is kind of hard to tell what you have on the camera screen during the shoot. I had the camera screen brightness dialed down to the minimum to keep from affecting my night vision.

I was very happy with the view of the night sky from this location and I think that it was worth the 8 hour drive out to Big Bend. Plus I enjoy being out there and hiking about.

When I was through shooting, I drove down to the Castolon area to look for an available camp ground. It wasn’t too crowded and I found a place to park and sleep in the back of the Highlander on a camping mattress. It was a warm evening, but I slept well enough.

In the morning, my plan was to go hiking at Santa Elena canyon on the Rio Grande. It was very muddy and I would have to wade across a creek to get to the trail. I decided that I didn’t want to get all muddy, so I went to the overlook and took the pictures of the mountains in the mist from this blog.

I did take a shot of the canyon with the river running down the middle. There is Mexico on the left and the United States on the right. I may have been standing in Mexico when I took this photo, it was difficult to tell as there is a shallow gravel area here that I walked around on. A hiking trail runs down the bank on the US side of the canyon.

Leaving the park, I filled the tank at the park gasoline station, and I took a diversion on the Dagger Flat Auto Trail. The words ‘auto trail’ should be in quotes, as it was a very rough dirt road out into the desert and I was hoping that I didn’t get a Dagger flat tire. It ends in a loop between some hills. I got out and walked around a bit, thinking that I might see a rattle snake or something, but I didn’t. I also didn’t see another person on the entire trail.

That was the end of my visit to Big Bend National Park. The park is a great place to go for hiking, solitude, and the night sky if you don’t mind the drive out there. I recommend it, but keep your gas tank full. Thanks for reading. Please leave a comment.

12 thoughts on “The Milky Way Over Big Bend”