I had been thinking of the moon on the horizon reflected across Inks Lake but most of the vantage points that are accessible in the park point West which would eliminate the possibility of a full moon rising over the lake in the evening. The property on the west side of the lake is all privately owned. So getting the rising full moon over the lake would probably involve me putting my camera and tripod in my kayak and paddling down to the highway bridge. See the map below. 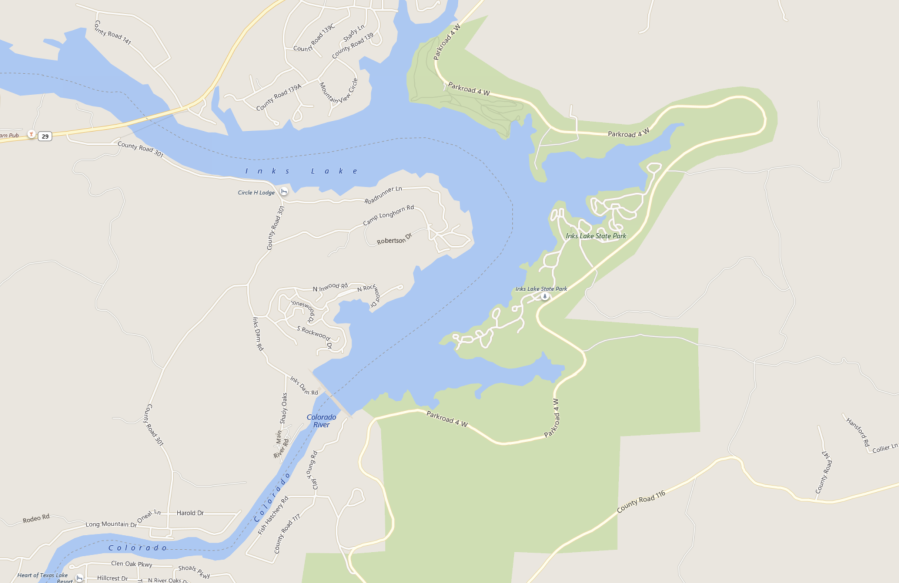 But, the full moon sets in the West at about dawn, so there would be an opportunity for this sort of shot before dawn. This means getting up and getting to the location before dawn. I would have liked to have just camped here, but this park is always full of campers and it is not always easy to get reservations. The other option was getting up at about 5:15 AM on a Sunday and driving for about 50 minutes to the park and setting up with the moon still in the sky. This doesn’t sound fun, but getting out of bed is the only difficult part. Once I am out and on the road, I am quite happy and energized to be going shooting.

I used the Photopills app to pick a good place to set up for the moon on Sunday morning. I found a part of the shore that would be well positioned with a lot of lake between me and the horizon. See the capture from the app below. The deep blue line points to where the moon will be when it sets, and according to the app it would set just a minute before the sun began to rise. I thought this would be good conditions for what I was trying to accomplish.

I got to the park and found a good place to park and tried to quietly carry my camera gear to the waterside without bothering any nearby campers. They were all in camping trailers so I doubt they heard me. The moon was still high above the horizon and beginning to turn orange when I got there. The picture below was shot at 6:43 AM after I spent quite a bit of time trying to figure out a good exposure.

For some reason, I didn’t get the moon’s reflection stretched across the water like I wanted. Maybe it was the way the current was flowing or the wind direction, but I got some decent reflection. One nice thing about this shot is the two types of light down by the boat ramp. One is a sodium light which usually glows orange and this kind of matches the color of the moonlight through the atmosphere at this time. This kind of helped me sanity check the white balance a bit. Also, the horizon doesn’t look level, but if you observe that the moon and reflection are vertical, you can see that the photo is level.

The next photo was taken at 6:48 AM (5 minutes after the first one). This photo caught a pretty good reflection across the lake. The moon does appear to be bigger as it approaches the horizon, but both photos were shot at 130 mm focal length with the same lens.

The below is a much wider shot at 70mm. It was shot at 6:49 AM, just after the above photo. I was trying to get more of the landscape in the shot. You can see the lights from the park store and boat ramp to the left across the water.

As the moon got close to the horizon (6:54 AM), I zoomed in to the maximum focal length of my lens (200mm) to make the moon as large as I could in the frame. Unfortunately, there is not anything interesting on the horizon to compare against the moon, but I like the shot.

After this, the sky was getting bright and the moon was fading away as seen through Earth’s thick and hazy atmosphere. I didn’t get any decent shots of it just on the edge of the horizon.

One interesting thing that I noticed while processing these photos is chromatic aberration caused by the lens. Meaning that the edges of the moon appeared to have a small magenta or green outline. As soon as I applied the chromatic aberration correction for this specific lens, the problem went away. It was really only noticeable at maximum zoom though. I had a cheaper lens that was much worse at this.

Amazing that no matter who we are or where we are on Earth, we can all look up and see the same moon. As I was watching it set, someone in Asia may have been watching it rise. When I have been on business trips to Malaysia and I speak to my kids in my morning, their evening, we have looked up and seen the moon together. It’s a connection for us all on this little world.