I recently went down to Galveston and brought my camera thinking that I was going to get some good photos. What I forgot about was how humid it is in Galveston. So, I would grab my camera gear and leave the nicely air conditioned hotel room and head out to take a few pictures and then find that I couldn’t because my lens was heavily fogged up. And it wasn’t just the front of the lens, it was fogging inside the lens as the lens that I was using (Nikon AF-S NIKKOR 16-80mm f/2.8-4E ED VR) is not well sealed as other lenses are. And it would take so long for the lens to heat up and the condensation to evaporate, that I never really got any good pictures outside.

For instance, I knew that the pleasure pier lights would look great against the blue sky just after sunset over the sea. So, I grabbed my camera bag and tripod and went to the seawall West of the pier and set up for some nice exposures. The best I got is shown below. 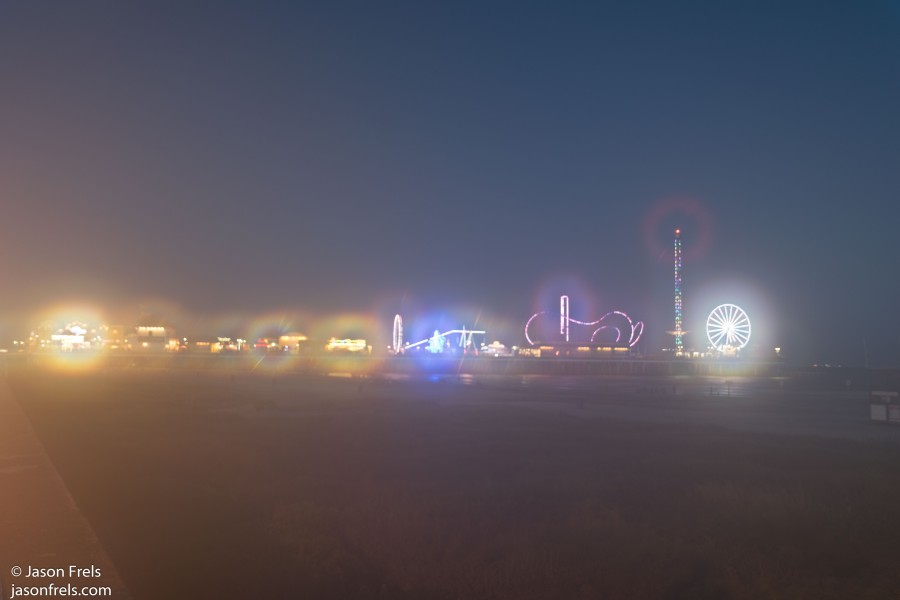 No amount of dehazing, clarity, or contrast adjustment in Lightroom is going to fix this foggy mess. I tried wiping the lens with a lens cloth, but the fogging was in the lens. I also sat and waited and waited thinking that the lens would warm up and the fogging would dissipate, but this didn’t work and it just got too dark to do anything. I was really looking forward to framing this shot and adjusting the exposure to get a nice picture of the bright lights of the amusement park over the water. Instead, I sadly walked back to the hotel with nothing.

The next morning, I put my camera in my bag and carried it for a nice walk on the beach thinking it would get nice and warm and the condensation would be gone by the time I wanted to take some exterior pictures of the hotel. 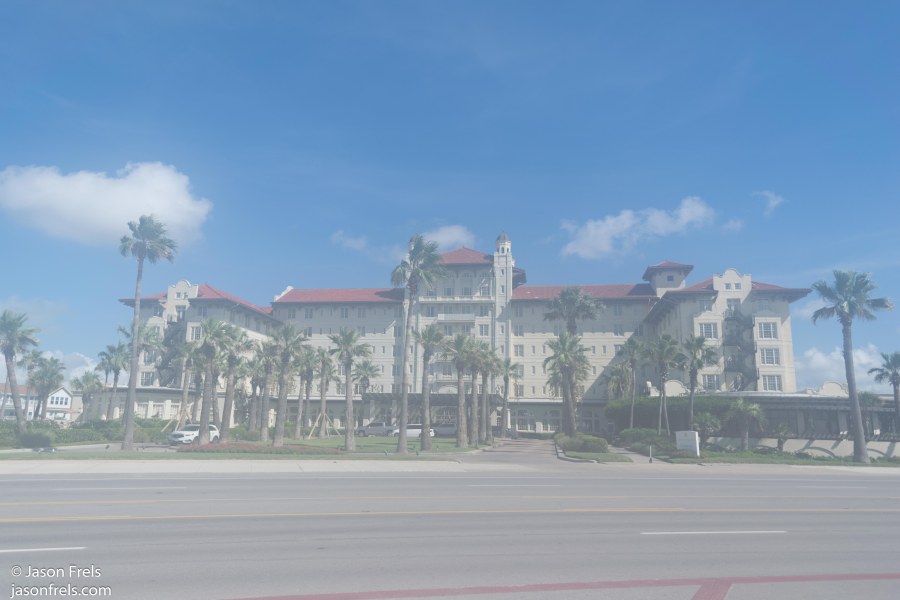 So, another cloudy picture and I ran out of patience waiting for the lens to warm up and defog. Besides, I had to check out of the hotel in time. So, instead of getting to take my time trying to compose a nice picture of the Hotel Galvez, I got fog.

Even after the camera had sat in the car getting hot for a while, the humidity was so thick that I just couldn’t get it to clear completely up. Below is a picture of some of the many colorful old houses in Galveston with a fog streaking across the picture.

After seeing what was going on, I tried leaving my camera bag on the hotel room window sill to keep it warm, but that wasn’t all that effective. I then just tried storing my lens in an air-tight bag and then not opening it until it got warm, but I didn’t really think of this until it was too late and I am not sure how effective this would have been anyway. When I got home, I put my camera and lens in a gallon size zipper bag with a desiccant pack to try to get all the moisture out of it. It looks fine now and I don’t see any evidence of moisture when I take a picture.

I used to live down on the Texas Gulf Coast and I knew it was very humid and warm there, but I didn’t do any photography when I lived down there. Now, I live around Austin in Central Texas where it is a lot drier and condensation usually isn’t a problem if I walk out of a cool house into the heat. So, I didn’t anticipate the condensation issue being so bad. I didn’t really have much a problem with condensation when I was at South Padre Island last year. Perhaps Galveston was just extremely humid when I went this year. I think that next time my strategy will have to be keeping my camera in a warm place. If I did this kind of shooting a lot, I would probably specifically buy a weather sealed lens.

I don’t have any nice photos to post this time, so I will just leave you with a picture of some crows sitting on the ledge of an office building. 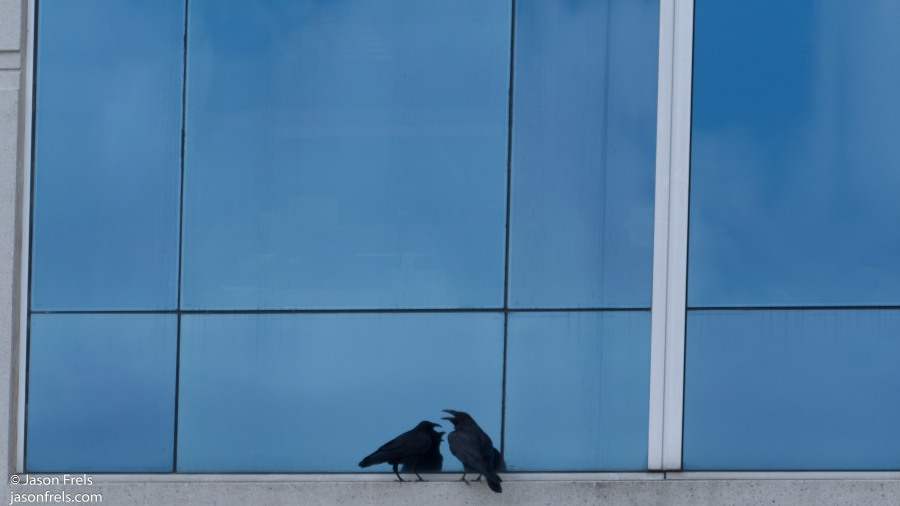