I have been in a state lately such that I don’t have a lot to photograph nor do I have a lot of time to do it. The weather alternates from clear blue skies to solid gray overcast. I have also been re-evaluating my photos in terms of composition and thinking about how and if I consciously use certain composition techniques when out shooting. Without good composition a photograph is just a snap-shot and I aspire to create something better than this.

Below I have listed a few important composition elements and some photos in which I have tried to achieve them. I am not sure that I am always very successful, but we often learn from examining our performance and looking for ways to improve.

A good photograph conveys an emotion to the viewer. This is a topic that I struggle with creatively as I really don’t think about emotions that much. But sometimes, I have a small inspiration for a photo with a strong emotional message. The following photo is one that I think was successful in these terms.

The silhouette of a lone individual staring into the vast cosmos on a dark night. I think this photo might make the viewer think of how small we are in the universe or even might bring up feelings of loneliness. Though, I can tell you that I was not feeling lonely when I took the photo; rather I was having a fantastic time enjoying solitude and nature. But it is hard to feel very big and important while staring at the vastness of the galaxy on a dark, clear night.

One way to attract the eye in an image is by using contrast. By placing a bright or warm object against a dark or cooler background, the object will ‘pop’ to the viewer’s eye. One image in which I tried to capture this technique is shown below. There is a brightly lit tree full of yellow and orange and against a dark back-drop. There was a ray of evening sunlight making its way through hills and trees to hit this one tree. So I set it up to the left side with a touch of the water reflecting the bright sky on the right.

I really like how this picture came out, but it never gained much favor on Flickr or Instagram so maybe I didn’t quite nail it. Maybe it is just a picture for me.

Simplicity, to me, is a deceptively simple technique for achieving good composition. It seems to be counter-intuitive that to make a photo better, you should have less in it. But, this often works. I often see photos that are amazingly simple photos of an isolated subject that work quite well.

I have tried this practice several times with my photos. It is really not as easy to achieve as you might think. Nature is a distracting place and it is hard to shoot around everything that you don’t want. In the two photos below I was trying for simplicity.

The first is just some rocks catching the evening sun at the lake. The water is smoothed with long exposure to remove the noise of the waves. The sky is mainly hazy and uninteresting. So you have the foreground rocks and the light source with a horizon line dividing the photo. I would like for the grasses to be gone as they are too distracting.

Next I have a lone yucca in the evening sun with the cliffs in the distant background. I was hoping that most of the foreground brush being in shadow would mostly remove them from the photo, so that only the yucca stood out. I was also trying to make the best of a clear and boring sky in the background. I also love warm colors and tend to go after that a lot while shooting. This image probably doesn’t perfectly achieve the simplicity target, but it is what I attempted.

One basic landscape photography technique is the rule of thirds. With this concept, the photo is divided horizontally or vertically into thirds and you place important parts of the composition at the dividing lines. The idea is to add interest to your photography by putting subjects off-center. Or perhaps putting the horizon high or low in your photo. This gives the photograph a less formal feel and perhaps adds a little tension.

One example I have of using the rule of thirds is shown below. The main subject (wild flowers) is in the lower third of the frame with sky occupying roughly the top third. The trees and water run through the middle third for separation. I like this photo, though it lacks an interesting sky.

In the below photo, image is physically divided into thirds by the window frame. With a palm tree in one frame and an foot bridge in another.

I don’t often consciously think about the rule of thirds while out shooting, but I find that I naturally use it from time-to-time.

Strong lines in a photo can be used to draw the eye of the viewer around and keep interest in the photo. Lines can provide an starting point that the eye is naturally drawn to in an image and then give it somewhere to go into the image to other points of interest. I spend a lot of thought when I am out shooting considering the lines in the photograph.

One of my photos that I think achieves this idea is a roadside photo that I took in Big Bend National Park. In this photo I have started with the road in the left foreground that has clear direction into the photo to the junction of the lines of the distant cliffs. I think that the viewer sees this photo, immediately starts at the highway and follows that to the warmly lit cliffs in the distance. It also helps that westerners read from left to right so are accustomed to starting from this side anyway.

If the below image I have overlain the basic structure behind the image. All lines lead the point at which the highway rounds the distant curve through the tall cliffs. 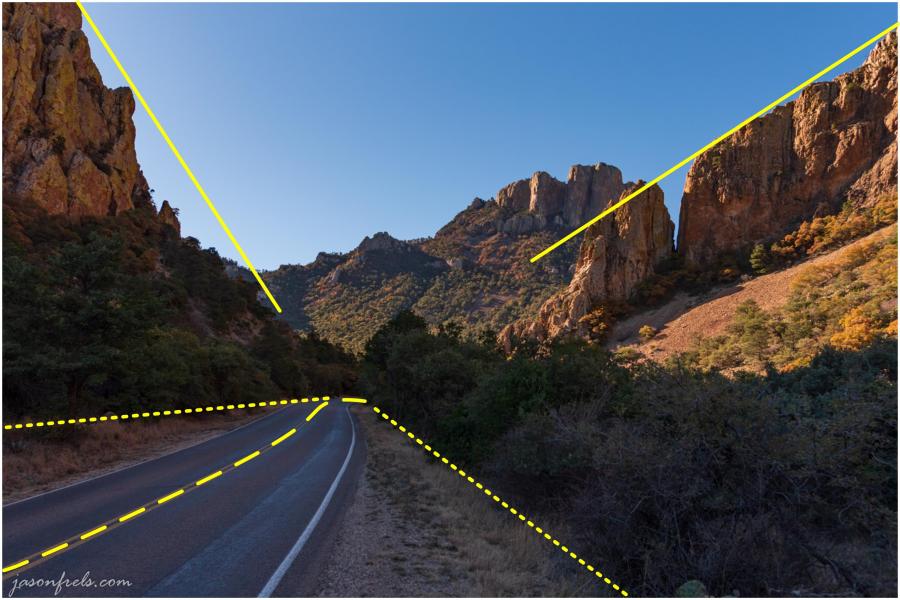 Another technique that can make a photograph interesting is finding repeating patterns or details. For some reason this can be a very satisfying thing to look at. Finding patterns can be a bit challenging in landscape photography as nature loves to be random.

One place I found some interesting patterns was in the wind-swept sand hills in west Texas while out camping. This was especially so in the early morning light after the wind had been blowing all night. I tried several angles and perspectives to capture these ripples in the sand. Below is one of my favorites. 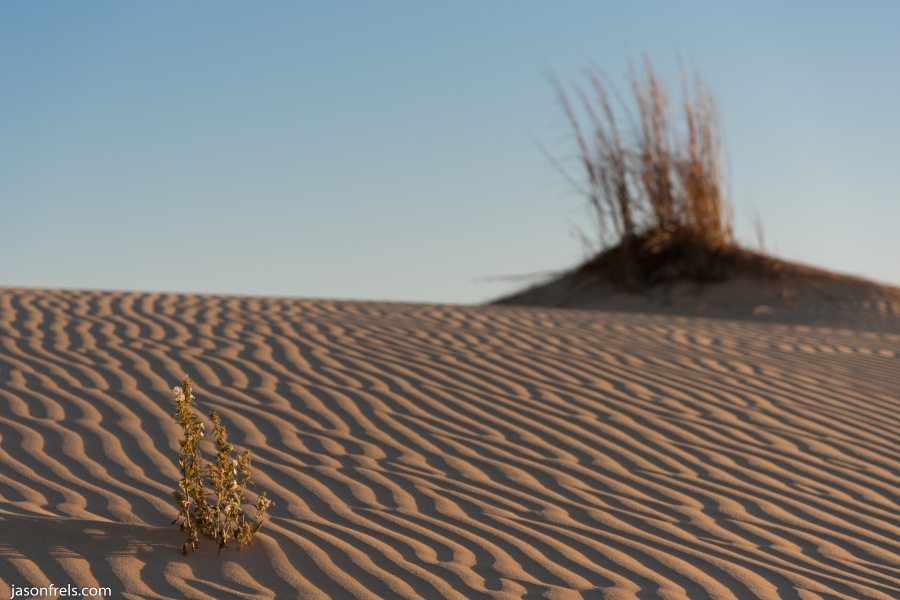 This little lonely plant in the foreground is also well isolated and the grasses in the background don’t mind being out of focus.

Those are some of my thoughts on composition with respect to landscape photography. i would love to hear your thoughts below. Thanks for reading.

7 thoughts on “Rules of Composition”