My youngest daughter turned 16 this week, and for her birthday she asked me to take her and some friends down to Houston and see the space center and go to the Kemah Boardwalk amusement park. She is really into astronomy and the space program, which is awesome, so it sounded like a fun trip.

At Space Center Houston, they have the last remaining Saturn V rocket on static display inside a large building. It is actually built with parts from three Saturn Vs in total from missions that were cancelled. For a long time it sat outside, which is how I saw it in the early 1990s, but they have since build a hangar around it to protect it from the elements and preserve it a bit.

The rocket consisted of three stages to get the Apollo space craft, including the command module, service module, and lunar module, into lunar orbit. It remains the largest rocket ever flown and the only rocket that has ever taken humans outside of low-earth-orbit. Below is a diagram that I downloaded showing the rocket and all its segments.

To get to the rocket from the visitor’s center, you have to get on one of the tram tours that takes you either to see the historic mission control room (which was under construction for restoration for the upcoming 50th anniversary of the first moon landing) or to see astronaut training facilities (which I believe has a mock-up of the international space station). The last stop on either tram tour is the Saturn V hanger, where you can hang around as long as you like.

The rocket is really long and difficult to photograph in the close confines of the building. I didn’t bring my DSLR and wide lens, so all I had was my iPhone which shoots with an equivalent focal length of 28mm (wide, but not ultra wide). The below photo is taken at the bottom of the rocket looking at one of the five first stage rocket motors. I was mainly trying to get an entire rocket motor in the shot looking up the rocket from the side.

I had to back off into a corner and wait for people to pass by to get the length of the rocket in the photo. I was really wishing that I had my camera and wide lens. I will have to return someday for another attempt.

At the other end you can see the command module and service module, with the emergency escape rocket on the tip. Below is a photo looking back from the top. This photo has a few people in it for scale.

I wonder what it felt like to be sitting on top with all of that rocket beneath you. I’m guessing both terrifying and exhilarating.

I will probably return this summer and hopefully bring my camera and wide lens and try some of these photos again.

After that, it was on to the Kemah Boardwalk where the kids did the rides and I took it easy. 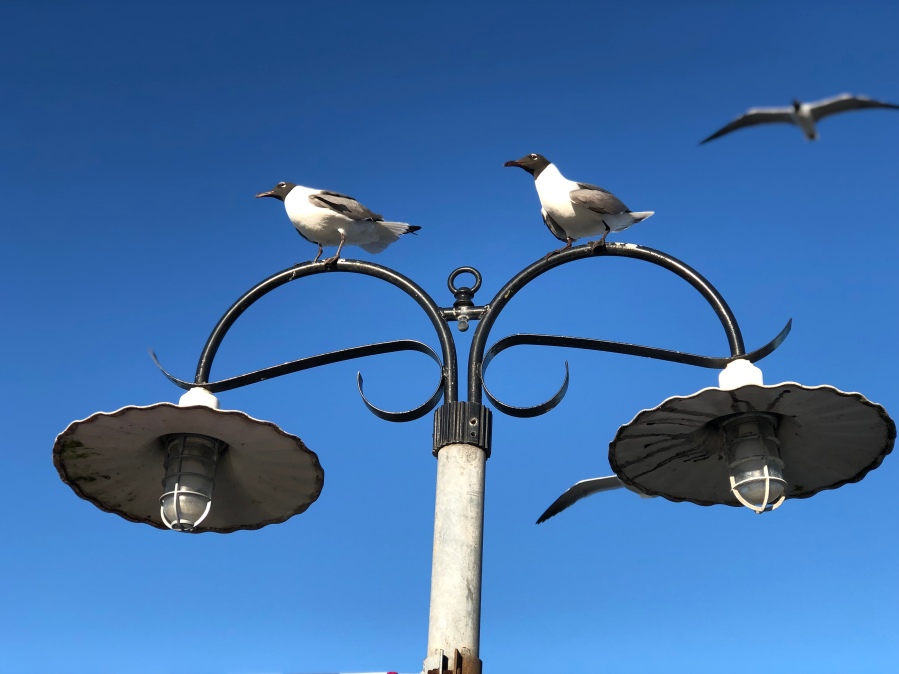