I haven’t had enough fall color yet and I was concerned that I was early last week and might be missing a better show this weekend. So, Saturday morning I headed to downtown Austin again, but this time I went down to auditorium shores by the lake for a different perspective. I knew the sun would be rising to the South of East this late in the year and it would come up and shine on the trees and buildings across the lake.

I got down to my targeted location just as the clock said that the sun would be rising. I figured on having about 30 minutes of golden hour to get some good warmly lit fall foliage across the lake in front of the large buildings.

The photo below is taken just after sun rise. What appears to be the sun at the far right of the picture is actually a bright reflection from one of the buildings. Directly across from me is the Austin Central Library with the tower that looks like a Jenga game behind it and next to that is construction on what I believe will be a Google office building.

I shot the above with a 14mm lens, which is the widest that I have, in order to get as much of the opposite shore and skyline as possible. I decided to avoid the power plant and as much of the power lines as possible to the left. It is also an HDR merge of 5 images to keep the sky and the darker shoreline exposed as well as possible.

Early mornings seem to be the preferred time for the rowing teams to practice. I am generally shooting around these guys as I usually don’t want them in the shot. This photo with a rowing team in it didn’t look too bad though. I guess they row for the University of Texas as I often see a motorized chase boat that says “Texas” on the side and has a guy on it yelling at them through a megaphone. Could just be a heckler, though.

I did a few long exposures, meaning about 10 seconds, to smooth out the waves. I am not especially thrilled with the way it turned out, I think because the ND filter affects the colors in a way that is hard to pin down. Also, as the sun rose a haze began to develop in the distance which was a bit difficult to deal with in Lightroom.

I kept waiting for the trees in front of the library to get some direct sunlight before the sun rose too high in the sky and transitioned more to whiter yellow light, but I think that they were shaded by a building down the lake on the opposite shore. They still managed to get a little color.

Looking at the wider angle photos, I was concerned that the trees were getting too compressed in the distance, so I experimented with some longer focal lengths. The below photo is shot at 35mm rather than the 14mm and 16mm shots above and captures a smaller segment of the shoreline.

These photos were taken from a platform off of a jogging trail along the lake shore. That leafless tree on the right blocks my view at other times of the year, but is leafless now allowing me to shoot around it more easily. Sorry the photo is so crooked, it was just a quick phone camera snapshot. 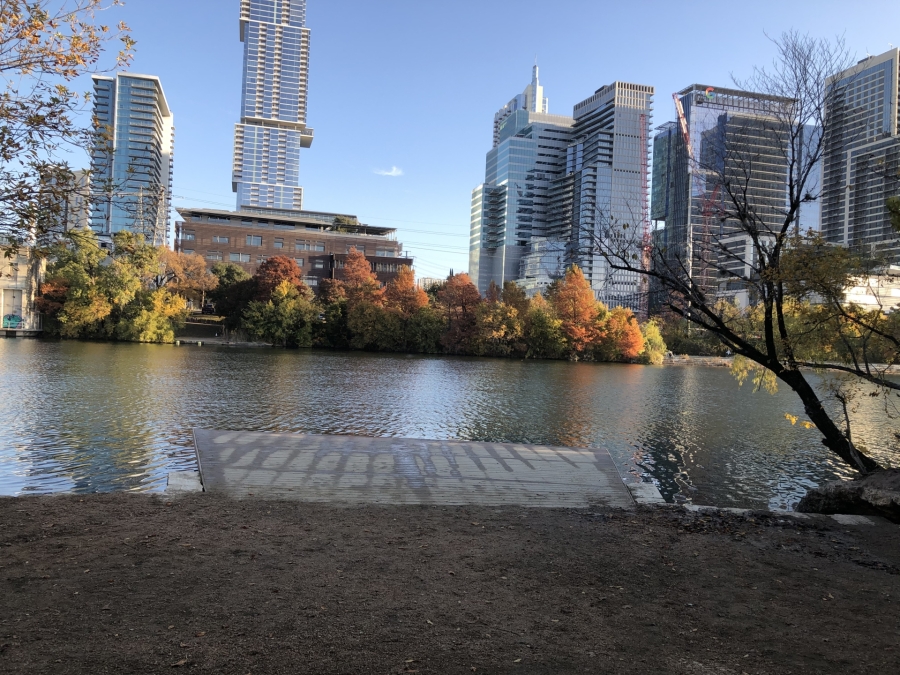 It isn’t exactly New England, but we get a little bit of Autumn color around hear. My bur oak is in the process of dropping all of its huge leaves right now, so I have a little mulching to do soon. It’s my favorite time of the year and it was a nice Saturday morning to get out and shoot.