On Monday morning, I grabbed my camera stuff and left for work early because I thought that I was going to go get a nice sunrise. While sitting bogged down in slow-motion traffic in Austin, I could see that there would be no real sunrise shoot so I headed on to work and got there early. But as the afternoon grew late, I watched the sky and saw that there might be a nice sunset. So, I made my plans.

I considered trying to go to downtown Austin and trying to get a nice sunset sky over downtown. The reward vs. hassle ratio was very low for this plan as it would probably involve a couple of extra hours in traffic, so I tried to think of a better plan. Between my office and my house is a park with a pond and I have never really gotten good photos there. As I looked at the park on the satellite map online, I found that I had ignored the dam at the eastern end of the park. I thought that if I set up there, I might get a nice sunset over the pond with the park off to one side. From the pictures it appeared that there was a fence along the walkway of the dam and I was worried that I might not be able to shoot over it. Below is the satellite view of the park with a little white indicator about where I stood on the dam. 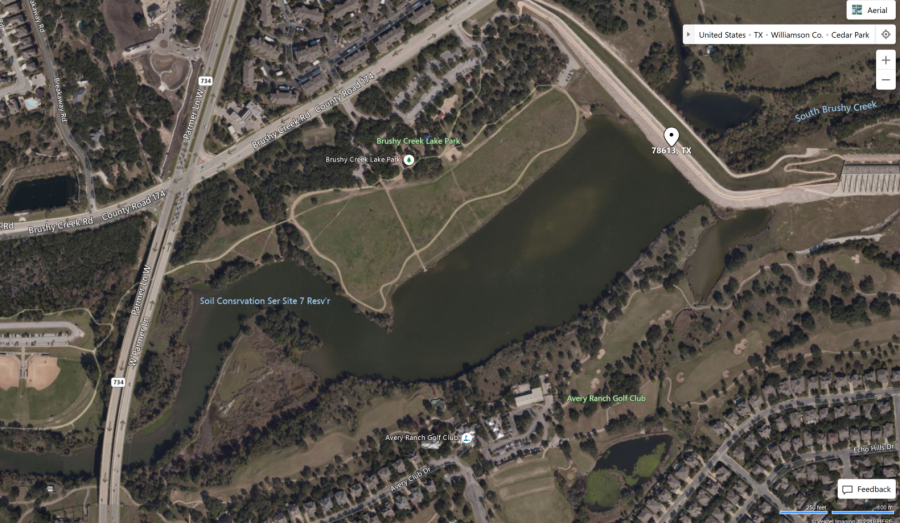 This is probably the best time of year for sunset at this park as the sun is setting close to its southernmost point of the year. In the summer, I think that the sun would set such that you wouldn’t get the full length of the pond.

I got to the dam in plenty of time and scouted around a little. There is a fence, but it is about 5 feet tall and I could easily shoot over it. I took a photo through a 10-stop ND and a grad filter with the sun still in the sky. This results in a lot of vignetting with such a wide focal length and filters, but it think that it turned out OK.

I had a lot of hope for that high, rippled cloud after the sunset and hoped that it wouldn’t dissipate as they sometimes do. I also considered hopping the low fence and going down on the rocks at the water’s edge, but I ended up just staying on the walkway and watching the clouds.

My high rippled cloud stuck around and about 5 minutes after sunset it began to light up with oranges and yellows. And with a few seconds exposure, the water was smooth enough to mirror the clouds. It almost looks like windblown sand at the beach.

I think that a bird splashed in the water in the foreground right before this shot and made some waves that distort part of the reflection.

The oranges faded pretty quickly and people started to leave, but I had a feeling that the darker red colors would eventually return and they did. I took the below photo about nine minutes later. Sometimes there is a second sunset.

Both of the above photos were shot with a 6-stop ND filter so I could get a longer exposure to bring out the reflection in the water. In hindsight, I think that I should have climbed down on the rocks near the water’s edge. I think that I would have gotten a more interesting reflection with maybe a slightly better foreground with larger, closer rocks.

The park is to the right and there is a golf course to the left. Neither of these really show up in the photo because of the wide focal length and the stark contrast with the sky. The grass is mostly yellow this time of year and would not have shown up well anyway.

Every evening I drive across that bridge in the distance on my way home. I will have to stop here more often and try to catch more sunsets and try some different camera positions in the future.