Devine Lake is a little park in my town, Leander Texas, that I go to sometimes to take pictures. It is very close to my house to a handy place. It is a nice wooded park around a big pond. It is rarely very crowded; people occasionally fish or kayak around there. It is a nice enough place to be, even in the summer, as it has shady areas of live oaks. 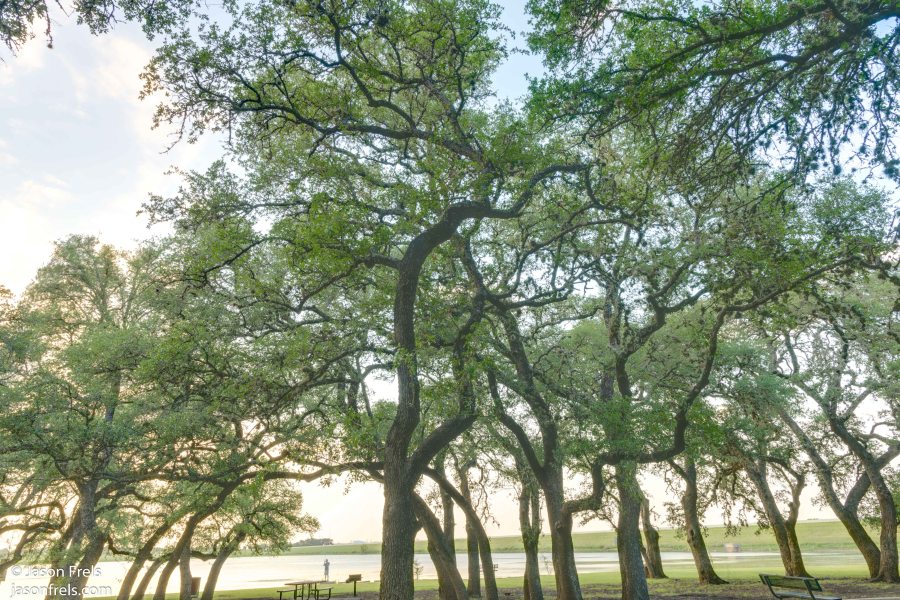 The above photo is an HDR merge from under the tree canopy about 15 minutes before sunset. I wanted to see how the trees and leaves would appear against the sky if I used HDR. Whenever including trees in an HDR merge, ghosting of the leaves blowing in the breeze is usually an issue, plus the person fishing. I didn’t worry about the leaves ghosting as I don’t mind that look, but I did de-ghost the fisherman.

There are usually ducks at the park. I hung around one afternoon before sunset and the ducks were wandering around so I got my 200mm lens and went about trying to get some nice shots. I was mainly trying to get the ducks looking at the camera with the afternoon sun behind me. I also ducked down low to get on their level. 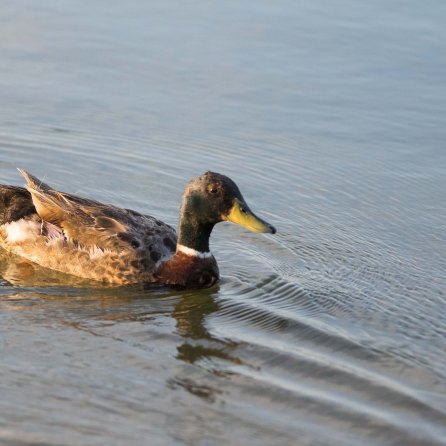 Ducks always look so happy. Anyway, shooting a close-up with the long lens at wide aperture really blurs the background, which I think looks good. I don’t have a long enough lens for most bird photography, but the ducks are pretty tame and allow me to get close enough for some good photos.

The main reason that I usually go to Devine Lake park is to shoot sunsets. I like to shoot sunsets in HDR and attempt to bring out the contrast between the clouds and bright colors. The below image was taken from a park bench on the shore right after chasing the ducks around with my camera. There was a man fishing, but I removed him in Photoshop.

There is also a place on the East side of the pond where you can see the sunset sky reflected in the water if it is not too windy. A strong wind blows the clouds too fast and ripples the water too much to be very reflective. I sometimes go sit on this park bench and see how the sky develops.

I would like to go back and try this with people on the bench to try to make this picture just a bit more interesting.

I try to get the warm sunset colors reflected in the lake as well as in the sky. This is not so easy when the water is a bit low. Here the sun is just peaking below the clouds and reflected across the pond.

A few minutes later the sun was gone and the sunset was a dull, gray mess. So, I packed up my gear and went home. That’s Devine Lake park. Not the most exciting place, but it gives me a chance to shoot photos and write about it.

All of the HDR photos were merged and processed in Photomatix Pro 5.1 and adjusted in Adobe Lightroom. I also use a good Windows app called IrfnView to quickly review the files. IrfanView will load and cycle through RAW files much more quickly than Lightroom, so it allows me to cull out the pictures that I don’t want pretty quickly.

One thought on “Devine Lake”