For quite some time now I have been trying to get a good panorama of the Austin skyline. I don’t quite have the shot I want yet, but I will continue to try. I have been struggling to get the light and clouds just the way I want. I usually try in the late afternoon while the sun is still shining on the buildings from the side rather than down from above as I have found I like this lighting better. There might be better light just after sunrise, but I haven’t found a good vantage point East of the city. Also, it can be a bit difficult to predict the morning clouds.

One place I have tried is Zilker park to the South of the river. I have only tried this a couple of times and I would like to put more effort into this place and perhaps use the river to reflect the buildings and sky. Below is a picture from Zilker park on a disappointing cloudy morning. I thought the rocks in the foreground might help this picture.

I also had a look at downtown from on the river itself from my kayak. This was a mid-day picture, so not great light and the kayak makes a lousy platform for taking pictures.

One of my chosen vantage points in Mt. Bonnell park on a tall hill just to the West of downtown. All of downtown, the capitol, and parts of the university of Texas can seen from here. There is also a nice view of the Colorado river and the highway 360 bridge. There is a certain picnic table at this park that I can put my tripod on and get an unobstructed view of all of downtown and it is a nice hike up to this point with a backpack full of camera gear and a tripod. I have generally attempted to get good pictures in the late afternoon. This is primarily because this works well with my work schedule.

The two images below show how the afternoon light on downtown can quickly change as the sun nears the horizon. These photos were not taken very far apart in time.

Later, just after the sun set, I attempted to get a nice picture of downtown with the lights from the buildings.

This was from my first trip to Mt. Bonnell and I was not very satisfied with the pictures that I got. I decided that I like the first picture with the high clouds in the sky the best of the bunch. It was also not very hazy when these pictures were taken, which is kind of rare in the late afternoon.

Below is view of the Highway 360 bridge on a hazy afternoon. Not a great picture, I may try again.

Also, Mt. Bonnell might be a good place to catch a nice sunset. This is looking away from downtown with all of the antennas against the horizon. 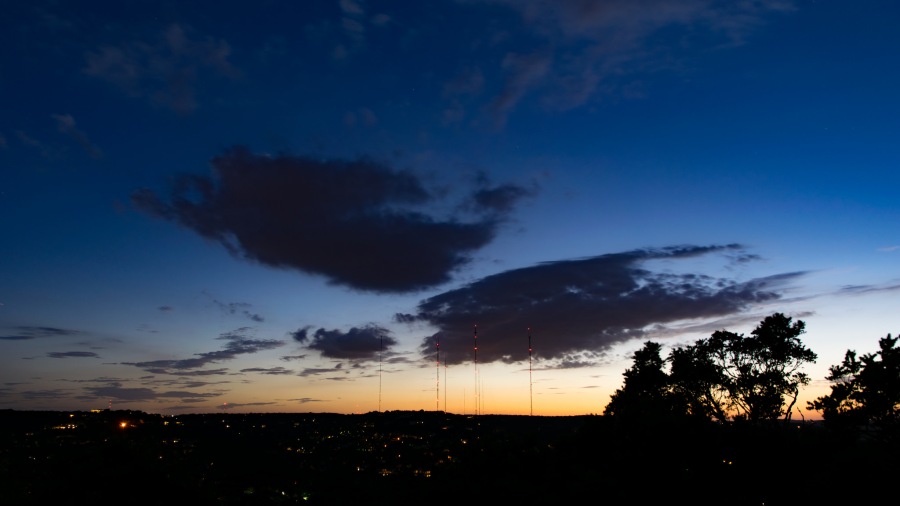 One morning, I managed to get down to the park before sunrise. Looking at the forecast, I expected a clear morning, or at most a few clouds. But, what I found was an enormous gray cloud bank that really ruined the effect I was going for. There were also people using the picnic table, so I was stuck with part of a tree in the way. I do like how the tower is lit up, but little else about this picture.

This was several shots using a 200mm lens as I was trying to get a lot of detail in the buildings. I merged the pictures using Lightroom and adjusted the exposure the best I could.

Trying for a late afternoon picture, one of my challenges is catching the clouds right and choosing an afternoon without too much haze. It is currently summer and there can be a bit of haze in the late afternoon sky, so I check the weather for the humidity and monitor the afternoon sky for clouds from my office window. One thing I have done to try to fight the haze is to use a polarizer on my lens. A polarizer should block a lot of the scattered light that you would get from haze and it has been somewhat helpful.

So, I try to get to Mt. Bonnell park about an hour and half before sunset to give me time to see if the clouds and light change for the better. On a July late afternoon it can be pretty hot at the park, upper 90s Fahrenheit, even more so wearing my work clothes and hiking up with a heavy backpack, but I really want a good picture.

This panorama was a merge of several photos that were all taken with a 200mm lens and the camera held vertically as I was trying to capture a good bit of the sky. The images were merged in Lightroom where I also adjusted exposure and tried to dehaze the final image a bit. This is a resized image to post on my blog, the original is about 43MB and would be good for having a large piece of wall art made.

I was hoping that the sky would be more clear and that the clouds would stand out quite a bit more than they do, but I ended up with a grayish, hazy background sky to work with. I did get the lighting that I wanted on the buildings, with the light coming in from the West and not too yellow yet. I will continue to try to get the perfect picture.

Shooting the above panorama, I used my Nikon D5300, Sigma 70-200mm f/2.8 lens, tripod, remote shutter release, and polarizer. Between each shot I had to adjust the tripod manually, which means that the horizon doesn’t line up perfectly from picture to picture. After adjusting the tripod, I waited a few seconds for the camera to stabilize and activated the shutter using a remote to avoid shaking the camera. I also tried to make sure that all of the images had the same exposure so they would stitch well together.

To stitch the pictures into a panorama I have used Adobe Lightroom and Microsoft Image Composite Editor (ICE). In Lightroom you can select the images in your library and select the photo merge function. You then get some options for projection and cropping. See the image below:

With ICE you can import the RAW files directly if you like. You get to select from projection modes and can also adjust rotation and crop. When done you can export the file to JPG or to TIFF or Photoshop file to further develop if you like. See image below:

One thing I found that I didn’t get just right was the straightness of all the buildings. I think this was due to the lens distortion that the lens correction filter didn’t quite fix.

I haven’t yet captured the panorama that I want. I will keep going back to this spot looking for just the right lighting conditions and practicing until I get it the way I want. I also want to see what kind of image I can get from another location like Zilker park. I will probable post an update blog on this in the future. To be continued…