I returned to Mt. Bonnell park in Austin for another attempt at a panorama as I haven’t been up there in a while. I was hosting a couple of visitors and I thought that they might like to see Austin from up there. The afternoon was mostly clear, if a bit humid, but I had a pretty good view of downtown. There were some hazy clouds in the sky that did not photography well.

The below image is a stitch of seven images shot at 200mm, 1/125s, f/11, ISO100. On the left there is the tower of the University of Texas. Moving to the right there is the Texas state capitol building and the various state government office buildings. and on the left is downtown. The image is a bit large if you open it.

I tried to overlap the photos by half to avoid stitch issues and I stopped down to f/11 to avoid vignette issues. I also applied the lens correction filter in Lightroom to reduce vignette on the images. I also applied dehazing in Lightroom to clear up the picture a bit. I think the stitch worked out well. I went through it and didn’t find any messy lines. The overlapping really helped in this regard vs. previous attempts.

This is still not the panorama I am looking floor. I would like a better sky with some interesting clouds. Maybe next time.

I also went down by the capitol building. The flags were at half staff for depressing reasons. The wind was blowing and I wanted the Texas flag against the dome. Maybe I am just going for that corny photo that says ‘Texas’ in a very obvious way.

There is a statue honoring the frontier woman at the capitol. I have always kind of liked this statue. It was a bit challenging to get a good exposure for the dark statue without blowing out the sky. I would have captured more of the building to the left, but there was a large scaffold there for some maintenance. I also left off the bottom of the statue to avoid getting some construction barricades in the shot. The statue’s face is well isolated against the sky and doesn’t interfere with the building in the background. I might have rotated around a bit more to isolate the full profile of the statue, but I was also trying to keep the flag pole in the shot. 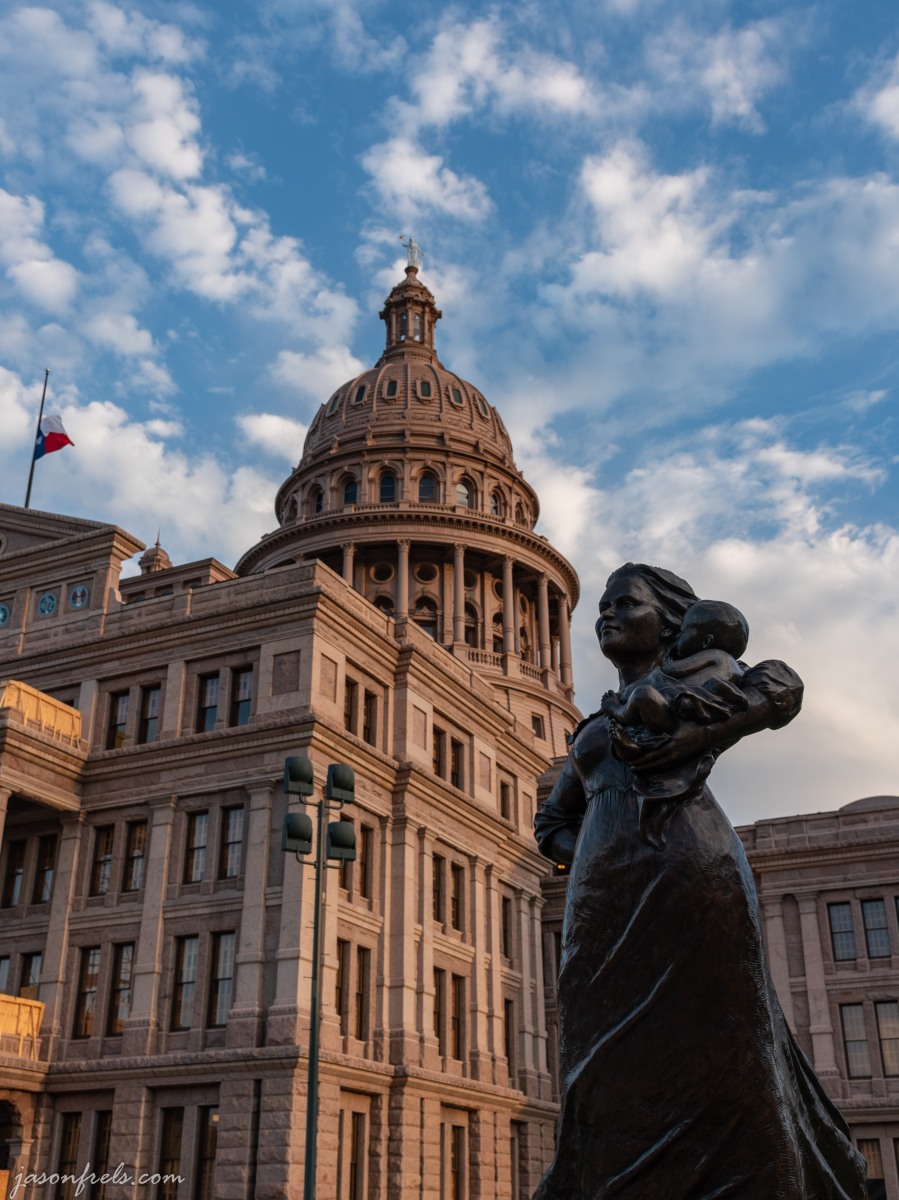 The below picture is kind of an abstract picture that, in hindsight, I think I could have done better. The symbol of Texas is the Lone Star, and so you will find stars everywhere in the architecture at the capitol. In the below picture, I was trying to capture layers of these stars in the foreground and background while trying to make the lines go together. I was also shooting around a large construction crane in the background.

I see now that if I had crouched down a little, I may have gotten more stars in the photo. Also, if alone and carrying my tripod, I could have set up and framed the picture better and then done some focus-stacking to get all of the stars sharp. Perhaps even do this in the morning light to get a blue sky in the background. Maybe an idea for a future project.

Well, that was my impromptu photo shoot in Austin on a Friday night. I sometimes bring my camera gear to work when I may have free time after work. In the summer the kids will be out of school, and the sun sets much later, and I will have more opportunities for this sort of thing. Thanks for reading.