It was Thanksgiving and I didn’t really have much time to go out and shoot photos, but I still wanted to write my weekly blog. I did go camping with family on some ranch land that my uncle runs down near Victoria Texas.

Like with every ranch there is a stock tank pond and I like the way the moss hanging from the oaks caught the afternoon sun. This is a very high contrast scene and the picture is exposed for the sky so the branches in the foreground are very dark, but I like it this way anyway. It would have looked very unnatural in HDR.

Later on after the sunset, I tried to get a long exposure with some cloud blur on the horizon. Below is a 3 minute exposure picture. I had a 10-stop ND filter on the lens and I probably still under-exposed it at 3 minutes. I set the shutter to bulb and used a shutter remote and the stop-watch on my phone to time the exposure. I also used long exposure noise reduction so this picture actually took about 6 minutes to take. I got the high clouds blurred across the deep blue horizon with some reflections in the pond.

After dark, when the moon had set, I headed out onto the pier to try to get some night sky shots. This time of year, the Milky Way is not prominent and this location is a bit too close to the cities of Edna and Victoria to get a very dark horizon, but I got some OK pictures.

In the below image, I was attempting to capture Orion in the sky to the South. You can see the three bright vertical stars of his belt in the upper middle of the picture as well as his sword, which contains the Orion nebula (if you look hard enough). The bright orange star to the left of the belt is Betelgeuse, a red supergiant. And down toward the horizon is a very bright star, which I believe to be Sirius.

Below is a screen capture of a program that I use called Star Walk (Windows 10 app). I set this for the time and approximate location of the picture. You can see the Orion constellation and other bright stars in the sky. 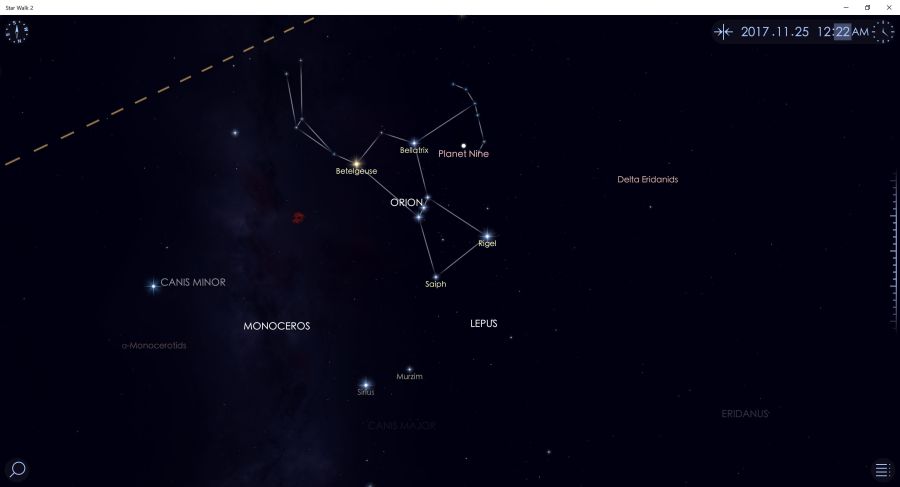 I just noticed that it shows Planet Nine. There is no known planet nine, it is just a theoretical location of an undiscovered planet that is believed to exist based on the orbits of certain Kuiper belt objects. It may be too far away and dark to see with telescopes.

Also, on this land is a family cemetery dating back to the 19th century when my great-great grandparents (and beyond) lived on the land. Many of the graves are old and not marked very well. There is one that is particularly sad, for a baby boy who died at less than two years of age. My great-great-uncle, or there-abouts. Perhaps I will be buried there some day, under the live oaks.