On day 2 of my camping and hiking expedition to Caprock Canyons State Park, I woke up to cloudy skies and didn’t have an opportunity to photograph the Milky Way before dawn like I had hoped. But just after breakfast, the wind picked up and blew all of the clouds away replacing the great soft-box in the sky of the day before with clear blue skies.

I went off to hike another area of the park with cliffs that were a bit steeper. I was really hoping to find some good compositions with the bright orange cliffs against the clear blue sky. Below is a picture shot before noon while there are still shadows across the cliffs. It was very difficult for me to find any kind of clean and simple foreground for this high cliff. I finally settled on this juniper with a bare tree behind it. 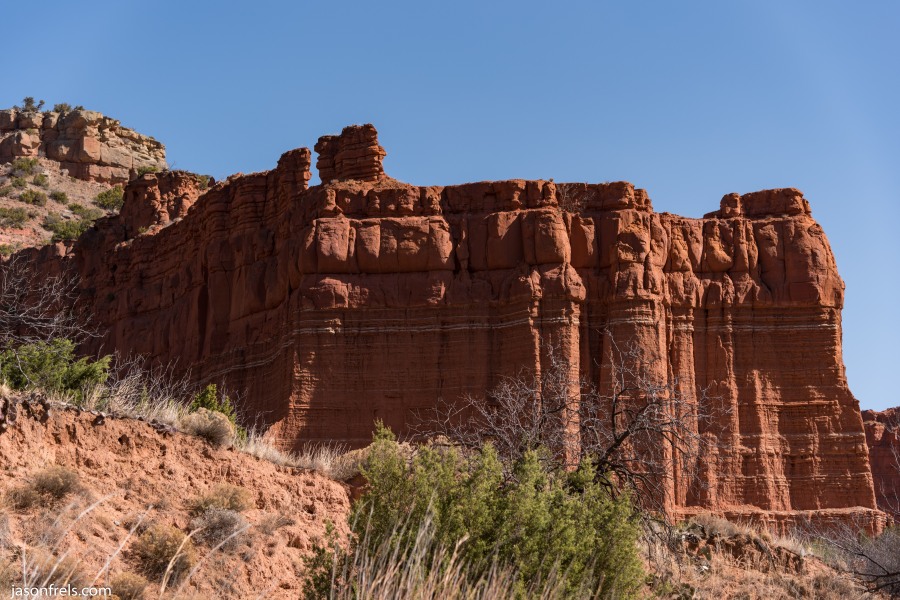 I really love the shape of the high jagged cliffs against the blue skies and the striated cliff walls. The shadows do a reasonable job of revealing some texture in the cliffs.

I would love to have some sort of element to show the true scale of these giant cliffs. While I do like the wisps of grass blowing in the wind, the foreground could really use a decent subject.

Next, I took this photo while perched near the edge of a high cliff. I climbed up a bit higher than this, but the wind was getting brutal, so I turned around. On the way back down I stopped to get this precarious boulder with the canyon extending into the distance. You might expect to see Wiley Coyote trying to pry this boulder loose to hit the Roadrunner stopped for birdseed down below.

This is perhaps my favorite picture of the day. I like the canyon and cliffs extending off into the distance with the trees down below giving scale. The boulder in the foreground telling the story about the perils of these high cliffs. The picture is very unbalanced with all of the visual weight on the left and a lot of negative space on the right, but I think it works well with the subject matter of high cliffs.

I do always feel in hindsight, like I have edited my images too dark. I really want all the rich color in the picture and I feel like brightening it up too much flattens it out a bit. I also set the camera to expose for the highlights (see symbol below), meaning the camera is set to meter off the brightest parts of the scene so that I don’t over-expose anything. I have had a problem clipping the highlights in brightly lit scenes in the past.

Next, I saw these jagged cliffs in the distance and scoped around for a vantage point. In the below shot I had a perch on the edge of a cliff over a ravine. 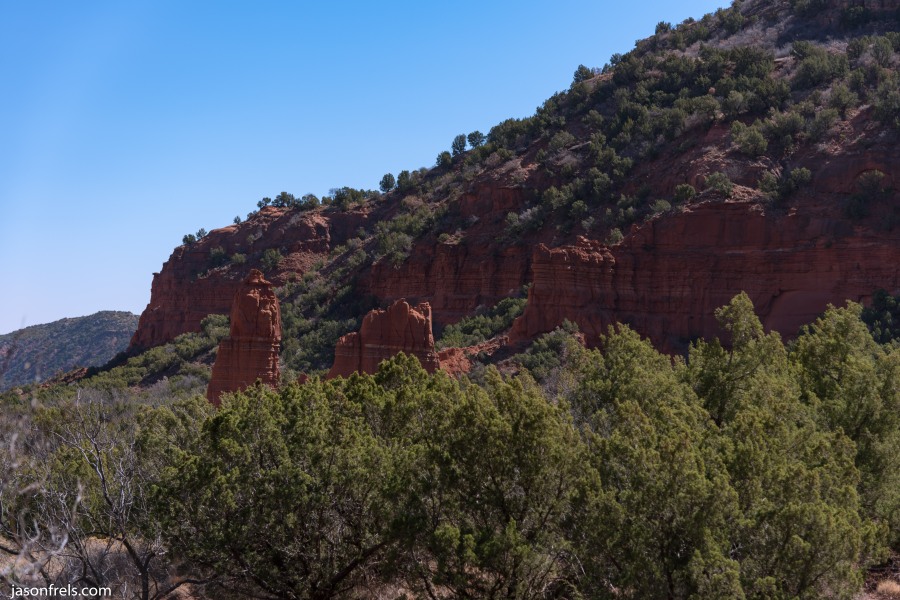 I couldn’t really go any farther to the right to isolate these cliffs against the blue sky, but I thought they worked out ok against the green juniper in the foreground. The cliffs are outlined a bit by the little bit of sunlight they are getting, but for the most part the cliffs are in shadow and perhaps that doesn’t work so well.

I later came across this large gray boulder in a stream with an enormous cliff jutting out of the canyon wall. This cliff was beautiful and majestic and I struggled to add a reference for scale to the composition. I considered asking my brother to go stand at the cliff base, but I settled on this boulder in the foreground.

I like this photo. The cool blue sky contrasts perfectly with the warm orange cliffs and really shows off their jagged edges. The stream runs off into the distance toward the cliffs. The bright boulder pops out of the foreground. There are grasses and trees, but they don’t really clutter up the composition, but add atmosphere. The shadows are a bit harsh, but they really emphasize the texture of the cliffs.

As an aside, I saw several roadrunners and heard several coyotes at night. The roadrunners would not cooperate with me for a good picture, I mostly got them running into the brush. And I never saw a coyote, though they really make quite a noise howling in the late evening.

I have several more pictures that I would like to post later next week. I would like to take time to discuss them instead of piling them all in here. Thanks for reading and please provide me with any constructive criticism you might have.

One thought on “Hiking in Caprock Canyons State Park (Day 2)”