It is late February and the plants believe it to be spring and are beginning to bloom. Below is a redbud (I think) blooming next to the lake with the Lamar Blvd bridge in the background. There were a lot of people boating on the lake.

I really edited this photo dark for some reason (note to re-edit and replace this image).

We ended up walking across the pedestrian bridge and around the park on the South side of the lake. We ended up at a parking garage that I wanted to check out to try a panoramic shot of downtown. The sky wasn’t ideal for a good pano of the city, but this was more of a scouting attempt. The below panorama is a stitch of 9 handheld photos taken in portrait orientation.

I am trying to sort out the best way to process a panorama from this location. I had LightRoom set to a cylindrical projection for the above panorama. I also adjusted the horizontal transform slider to the left a little as the buildings on the far left are farther away from the camera and I was trying to center up the point of view.

My plan is to come back and get this in the predawn twilight, hopefully with some interesting clouds in the sky. 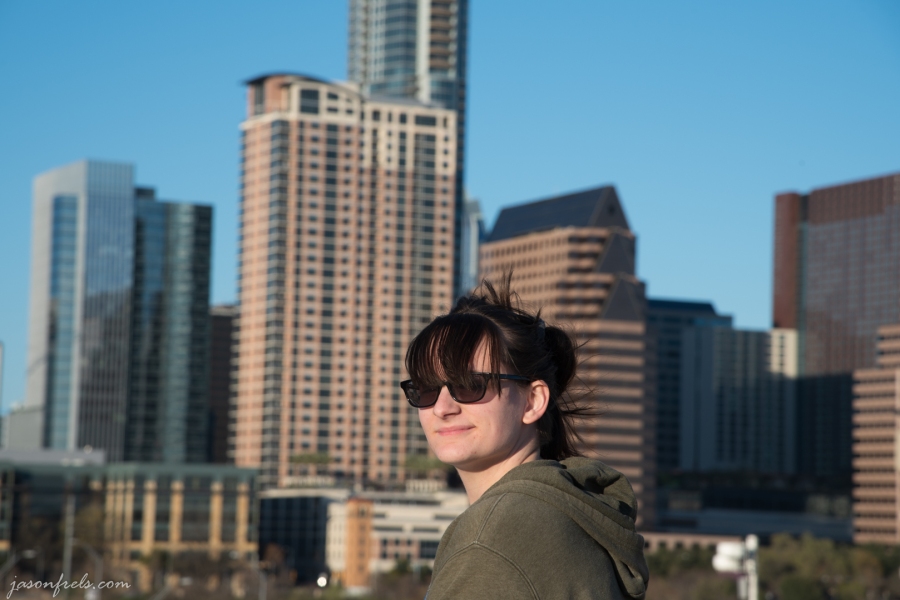 We crossed back over into downtown and walked around until we found the restaurant that we wanted. We then headed back toward the car. We walked past the Austin Central Library and stopped for a few photos.

I didn’t bring a tripod, so I took the below photos at high ISO. At ISO3200, noise was not much of a problem. Just a couple of look-up shots of the new tall tower that is nearing completion with the lit up bridge near the library.

I don’t like shooting at high ISO, but the pictures turned out fine and you won’t see any noise unless you go looking for it.

I am going to keep working toward that panorama idea, so stay tuned for more. I just have to get out of bed early on the right morning. Thanks for reading.