I just got back from taking my daughter to Yellowstone National Park and Grand Teton National Park. We were there for several days and I have a lot of photos to go through. We did have a lot of fun looking for the large animals and I am posting some of those pictures today.

One thing that you will see plenty of in Yellowstone is bison. There are herds of these things everywhere and they often get in the road and block traffic. They don’t really seem to pay much attention to people as far as I can tell, but I don’t want to be close to something that massive and having those horns. The below photos were shot at 200mm focal length from a safe distance. I saw people getting much closer to get photos with their phones.

We also saw elk a few times. I do find the elk to be a bit more photogenic than the bison with their antlers. The two in the below photo were just resting near the side of the road as several dozen people gathered around to take their photos. I waited until they were in the frame together and for the one on the right to lift his head out of the grass to take this photo. I think I got a good profile of their antlers against the green backdrop of the hill.

There were also quite a few of these pronghorns around. I pulled over and waited for them to get into a good position to photo. They didn’t seem to care that I was there. There is a river down the hill behind this one, but I couldn’t find a way to get it in the frame.

Along the same road as the pronghorn we saw a lot of black bears, including a mother bear with her two cubs. The bears seemed not to take notice of the people but I gave them a lot of room anyway as I don’t want to face a mother bear that feels her cubs are being threatened. I took this from a hill across the road at 200mm. There were several people much close to the bears than we were and didn’t seem to be taking them seriously. The cubs were cute and I was glad that I bothered to pack my heavy longer lens for this trip.

Not far up the road we found this guy right along side the road digging at an insect nest I think. We were very close to this bear and in our car shooting out the window. The bear just went about his business of digging around and eating flowers. It was pretty cute. 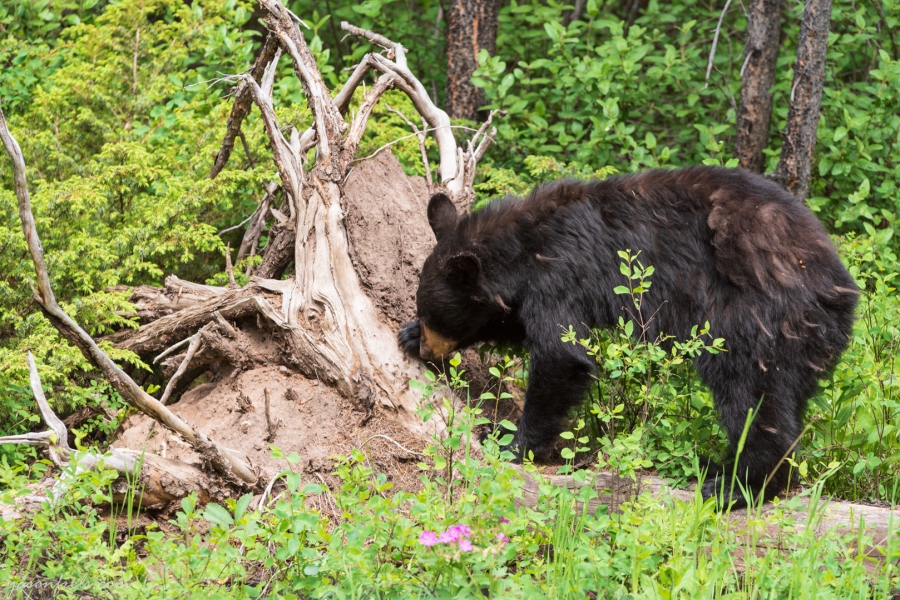 We didn’t see any moose in Yellowstone and we were worried that we wouldn’t get to see any. But on our last day we went down to Grand Teton National Park, which is apparently where the moose like to hang out. Driving around we saw several moose including this one laying down in the grass near the roadside. I was pleased to get one with the large rack of antlers. We waited around several minutes for him to get up, but he seemed content to lay about in the late afternoon.

Those are my best animal pictures from Yellowstone and Grand Teton. It was a lot of fun finding the animals and stopping to look at them and shoot photos, though it does take quite a bit of patience with the crowds of RVs.

7 thoughts on “Animals in Yellowstone”