I made reservations to go hike with the kids at Colorado Bend State Park several days ago, but as luck would have it Wednesday turned out to be a cold rainy day. The kids did not have any interest in going out and hiking in the rain, but I really wanted to get out of the house as this was a vacation day and I was tired of seeing them go by with little to show. So, I risked the possibility of downpours and drove out to the park anyway. I figured that I could still get good photos with a gray dreary sky if I mostly kept the sky out of the shot. The trail that I had in mind was the Spicewood Springs trail which features a series of small waterfalls and pools along the trail. Because of the rain I had the entire trail to myself and didn’t see anyone else on the trail.

One of the issues with this trail was that it involves a lot of hiking over slippery wet rocks and even through the stream a few times, so your feet will probably get wet. The photo below shows a long exposure at the beginning of the part of the trail that runs up the slippery creek. You can see the first small cascade in the distance. The trail goes straight up the right side of this photo through the water and I am happy to say that I did not slip and fall on my hike.

I started out using an ND filter to allow long shutters, but as the day grew darker and I moved under the trees, I found that I could just use a really high aperture and get 4 or 5 seconds exposure, which was plenty. Shooting with a 10-stop screw-on ND filter is a hassle because it is almost impossible to focus through it, so if you change your composition you have to remove the filter to recompose and re-focus and then put it back on for the shot.

Even with the total gray cloud cover, I was still able to get the forest colors in the shot and the trees and plants let me mostly hide the sky.

The trail does involve a little climbing on slippery rocks in this case. Below is a photo looking down at a small waterfall and pool from the rocks above.

In certain shots I wanted to be able to see the rocky bottom of the pool but the gray sky reflection blocked it all out, so I used a circular polarizer to knock down the reflection. The first image below was shot without polarization and you can see plenty of sky reflected in the water.

Using full polarization in the next shot, I was able to see the plants under the water that I thought were nice looking.

There were a lot of leaves along the trail and I like the way the fall color stood out in this scene (below) with the waterfall in the background. I shot this wide at 16mm and much closer to the waterfall compared to the 35mm shots above from a distance. So the waterfall stays about the same size in the picture even though I am much closer.

The rain continued to increase so I wrapped up my shooting at a large pool near some cliffs. The camera gear got a bit wet, but it is all weather sealed and I let the heater blow on it all the way home to dry it all out. 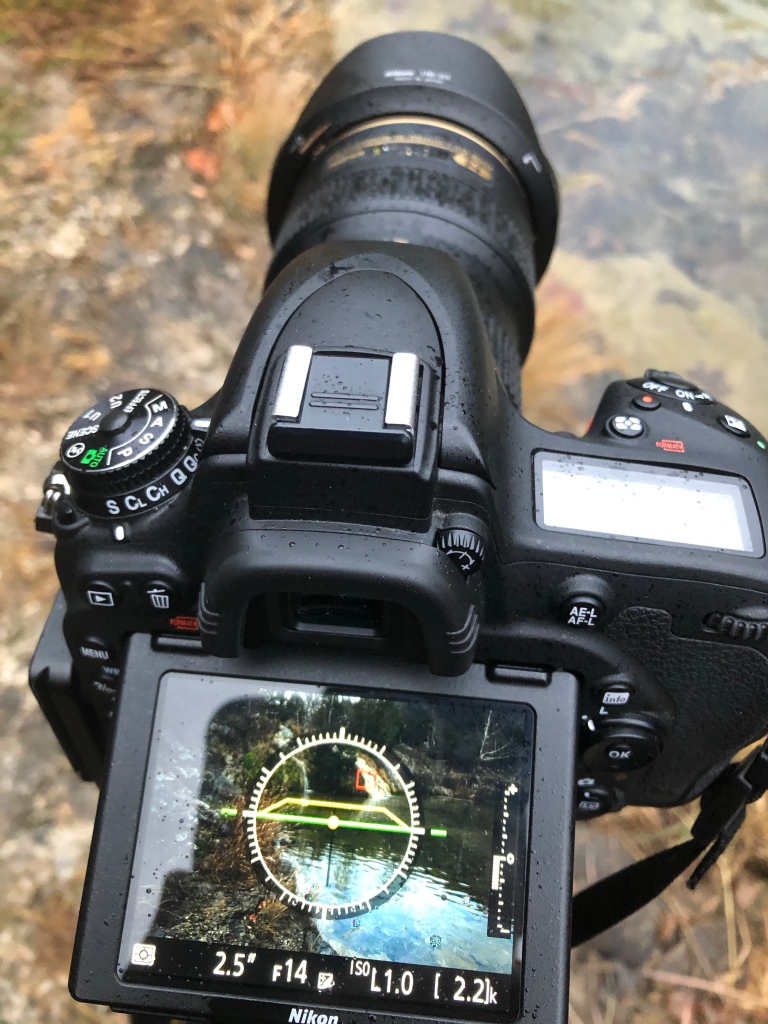 I worked on this final area for quite a while trying to figure out what to do with the rust colored grasses in the foreground and the green rocks in the back. I tried a wide shot that took in more of the pool, but the waterfalls were pushed back to nothing. I finally decided on this photo shot at 24mm with polarization.

You can keep hiking and climbing up the trail to the left, but this is where I turned back as it was starting to rain harder. I was getting wet and my feet were soaked, so I packed up my gear and put the rain hood over my backpack and hiked back out. It stopped raining when I got to the car, so I wandered down by the river to see if there was anything for me to shoot, but it was getting dark and I didn’t even take a shot. I did drive back home happy.

32 thoughts on “Photography in the Rain”