I went out in the evening thinking that I would shoot some fireflies. There is a park nearby where they hang out around dusk. The mosquitos hang out there as well, but that’s outdoor photography. So, I had my camera and tripod set up attempting to aim in the general direction of the fireflies, and they went somewhere else. I chased them around for a bit, but finally decided to hang out in one place and be patient.

Another challenge is focusing as it is dark and you don’t know where the fireflies will be. It was a clear evening with no moon and all I had was some light from some nearby street lights. So, I tried to focus on some nearby foliage and set about f/8 and experimented to get a good focus. I basically had to just take 20 – 30 second exposures and hope that a few fireflies flew by. This did not work well and the best I got was this little yellow blur: 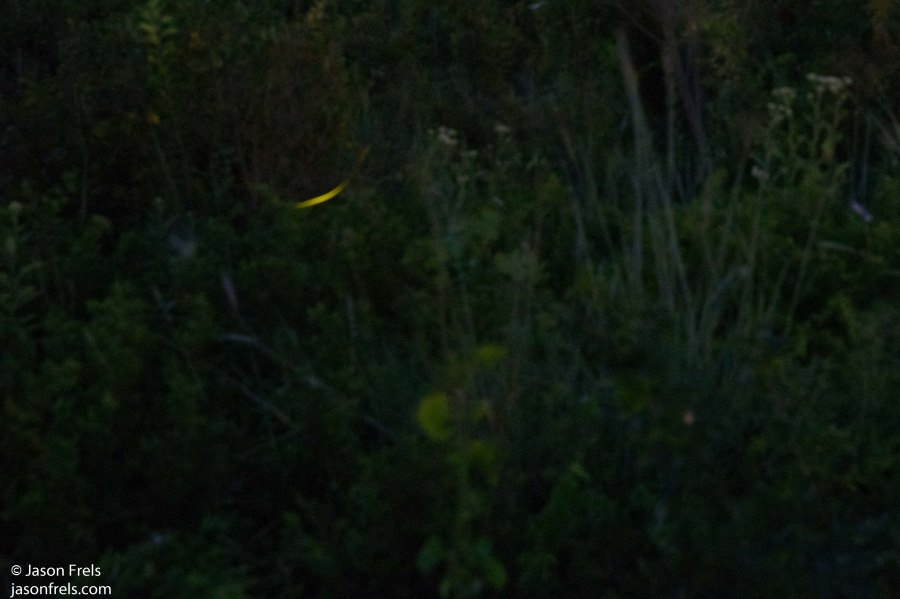 A big problem was finding the right ISO setting. The ISO had to be high enough to pick up the fireflies, but I also needed long exposures to have a chance of capturing them. Trying really high ISO, like 3200, resulted in pictures that looked like daylight and I couldn’t see the fireflies anyway. I eventually ended up around ISO400 and a aperture of around f/8 to make focusing better and to get a long enough exposure. I also enabled long exposure noise reduction to keep the image as clean as possible.

I also decided I needed a longer exposure in wider area with a little more interesting scenery than bushes and grass. So, I set up with a street bridge above the creek thinking that I could get some blurred car headlights and tail lights as well. Using the remote control, I took 1 – 1.5 minute exposures, hoping for fireflies, and timing my shots with a stopwatch app on my phone. Finally in one shot, some fireflies cooperated. A couple of fireflies buzzed around for a minute in front of my camera and I got a nice enough little picture.

You can see little yellow streaks just above the creek with the tail light blur of a car going over the little bridge. I like the street light reflected in the creek as well. What you can’t see are the dozen mosquitos buzzing my ears and biting my legs while I wait for the timer to count down. So, that was my Saturday evening adventure.