My fourth and final portraiture class was about trying a bunch of seemingly weird techniques to shoot portraits. Mainly using the flash lighting in ways that went against the conventional rules of shooting portraits.

First, we shot a model with a white background. The background was lit by its own flash so it wouldn’t be a gray background. The model was surrounded by lights and reflectors, including a black panel to her right so that she would have some shadow for depth. The photo below shows the lighting set-up.

The next photo shows the photo of the model against the white background lit as you see above. Checking the histogram, the background is not blown-out.

Next, we opened up the aperture until the background was over-exposed. The model is now against plane white space and is to have an “ethereal” look. 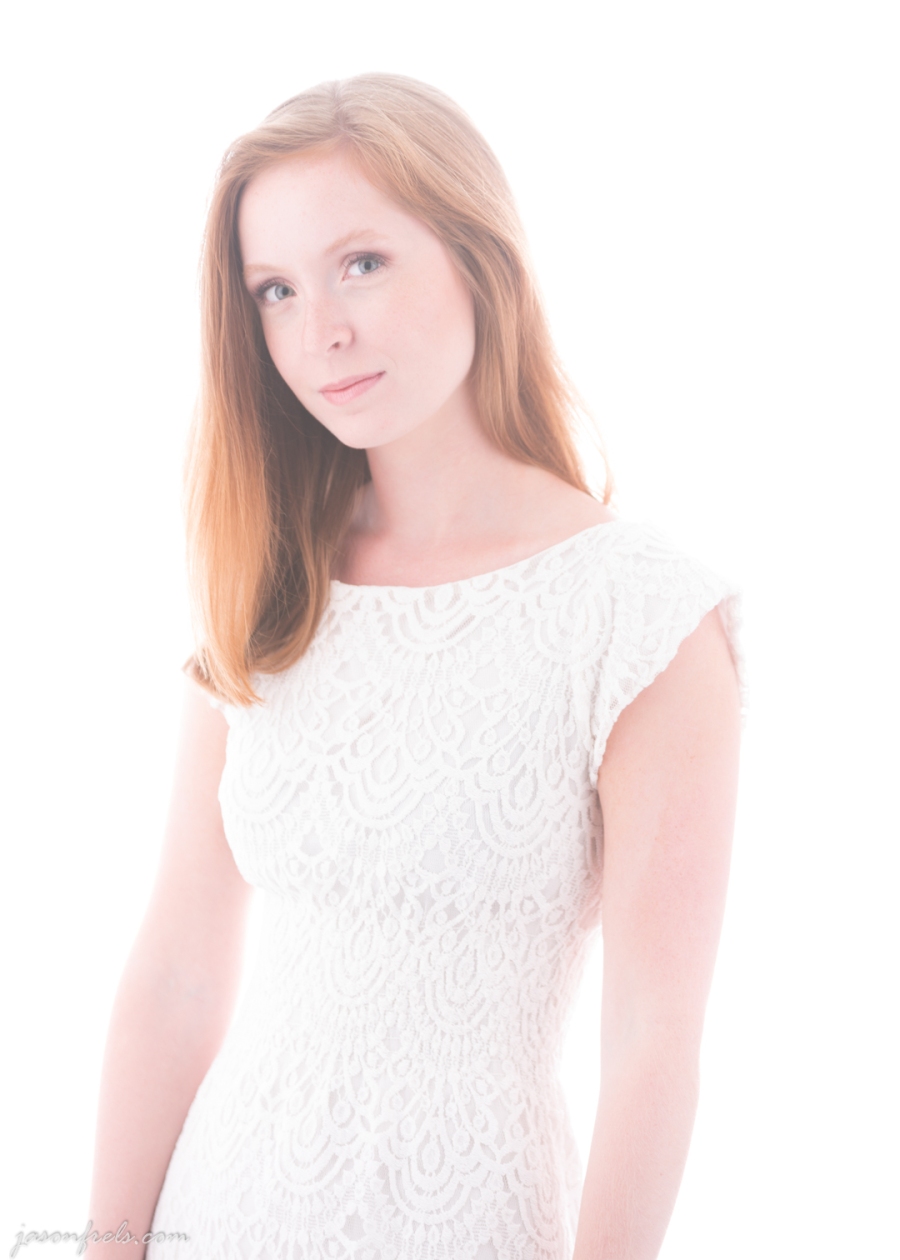 The model is not over-exposed and has true highlights even thought the background is completely blown out and white even if I bring down the white slider. Even if you don’t like this ethereal look, you can drop the global exposure and the model looks like she did in the first portrait, but the white background is still just as white (I experimented with this). This also give you good subject isolation if you wanted to Photoshop in a background.

Next we experimented with “Rembrandt” lighting. The right side of the model’s face is in shadow except for a triangular area under her eye. Same white background, but only the model has a flash and everything else is underexposed.

The model’s eyes are suppose to be in shadow, but it kind of gives me the impression of a skull. The high contrast lighting even manages to exaggerate the hairs on her arm, which I don’t find appealing. I can bring some of the shadows up in LightRoom, but that is not the point of this image I think.

The next pose was similar in that it used one light source, but with more of the body and background in shot. Sort of a classic movie star pose, I think, with the model looking up into a single light source.

I reduced the color saturation in the above photo as the colors were not adding much to the image. I do think a hint of color for the model’s face and hair works well instead of just black and white.

Next was a bright flash on the model against a close white background. This was to look like a Guess ad from the 1980s, though I must admit that I don’t really get the reference (and I’m from the eighties). The model is making dramatic poses with harsh side lighting so that she has a deep dramatic shadow behind her.

I also reduced the color saturation in this photo a lot to emphasize the contrast and silhouette shadow. It took several attempts to get a good photo because the model was moving a lot to give the image a look of motion and I think that it was difficult to hold the poses long in those heels. I shot this from across the room at 150mm focal length.

In some of these photos the lens flare was right over the model’s face, so I had to cull through a few images. I also had to move to get just the right amount of flash peaking around the model to get a good star flare. The light of the flash is mostly blown out in each image. I am not sure if I care for the extreme cool or warm white balance, but it is a technique that is there if you want it.

All of these photos were shot from a distance using a 70-200mm zoom, so there was very little distortion across the field of view from different objects being different distances to the lens. The model also did not have to tolerate me being within 10 feet of her.

I have several other photos of different poses, but the ones I uploaded here are my favorite of the day. That was the last of the portrait classes. I enjoyed the class and learned a lot about shooting portraits. I don’t think that it is something that I will ever really get in to, but maybe my daughter will and I can help her with the equipment and settings if she likes.

Read about the previous portrait classes at the links below: