It was my first morning in Singapore. Fell asleep early the previous night from the long series of flights and was wide awake at 3:00AM. After a while I decided to just get dressed and go out for a walk. I ended up down by the waterfront as it is very scenic. It was also incredibly humid and I fought with haze and lens fogging quite a bit.

This photo is looking across the water towards downtown and Merlion Park. I loved the beautiful milky reflection of the Esplanade bridge in the water. In the distance you can just make out the Merlion statue.

You may be asking what a Merlion is. It is half mermaid, half lion of course, and it is a symbol of Singapore. In the day, it shoots water out of its mouth, but not at 5:00AM.

I walked around a bit, waiting for the sun rise, but I began to see lighting in the western sky and it became increasingly cloudy. I stuck it out to see what the clouds would do. I took this photo facing south across the water to downtown. The wind began to die down and I was able to get some reflections of the buildings. 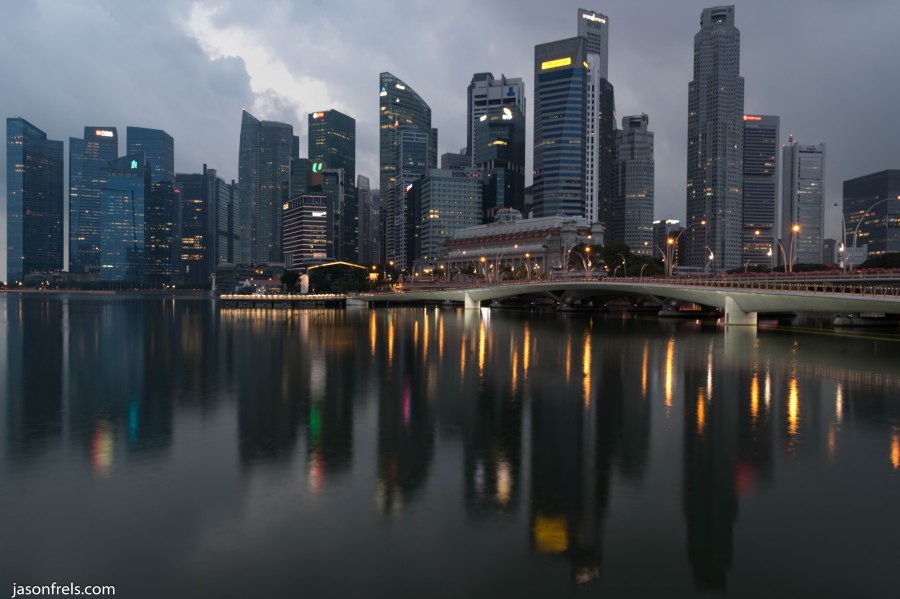 Across the water, facing west, there is a large iconic structure. I think it is called the Marina Bay. I was hoping for a more dramatic sunrise, but the clouds were thickening and it was beginning to rain.

So, I had to pack up my camera and head back to the hotel. I will be out and about in the afternoon to see what I can see.

One thought on “Sleepless Morning in Singapore”