I have been in a quest to understand what makes a good landscape photo. One thing that comes up every where I look is simplicity, or a lack of unnecessary objects in the composition. This could be wayward power lines, tree branches, trash, whatever clutters up a photograph and detracts from the composition. I started looking at my landscape photos with this in mind so I can try to fully understand this concept.

Below is a landscape I took at Guadalupe Mountains National Park. The point of this photo was the distant cliffs in alternating morning sun and shadow and I wanted the spiky cactus in the foreground for scale and depth. What I ended up with was a lot of trees, and brush, and weeds in the foreground making a cluttered mess of my composition. That big tree on the right isn’t helping anything, but at this time I thought it might be useful.

I should have take more time to better isolate one or two cacti in the foreground and shoot around all of the other plants. That would have been a cleaner message. Compare it to the following picture. The point of this picture is the golden late afternoon sunset in the high cliffs of the mountains. There is a simple subject that stands out against the background and there isn’t clutter to distract the viewer. The vegetation is in the shadow and you don’t notice it until you go looking for it. I remember moving around a bit to intentionally get stuff out of my way. Same mountains; better picture.

Keeping the idea of simplicity of composition in mind, I went on a photo shoot to attempt to put this into practice. My first attempt was with a cactus. I live in Texas and there is a lot of cactus to deal with. The cactus was in a position such that it was being lit by the setting sun while most of its surroundings are in shadow. This allowed the cactus to really stand out from the clutter, I thought. I tried this shot with the hills in the background and then I got way low and tried to get the sky as the background. 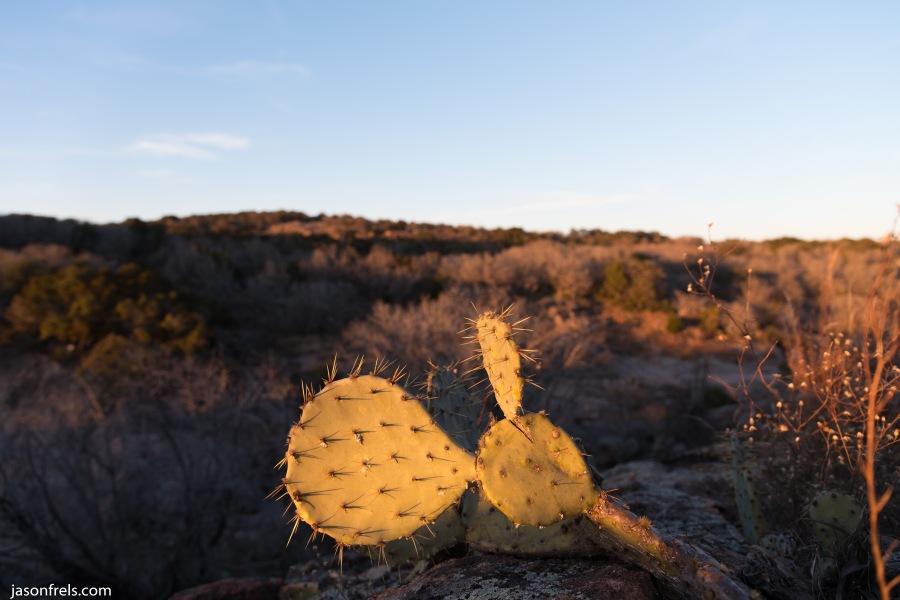 I think the first one works better, but it is not a stellar landscape photo mainly because cacti aren’t that interesting of a subject taken by themselves.

The sun set and I got deep into twilight and I got the idea of a single tree against the western horizon with the lake for reflections of the sky. It is winter and the tree has no leaves, so I thought that the silhouette of its complex bare branches against the horizon and lake would look great. Especially with the sky transitioning from dark cool blue to warm yellows and oranges.  I had to get the camera down low and find just the right place as below the tree there is a muddy area that I didn’t want, and it is not far to the trees on either side of this one. 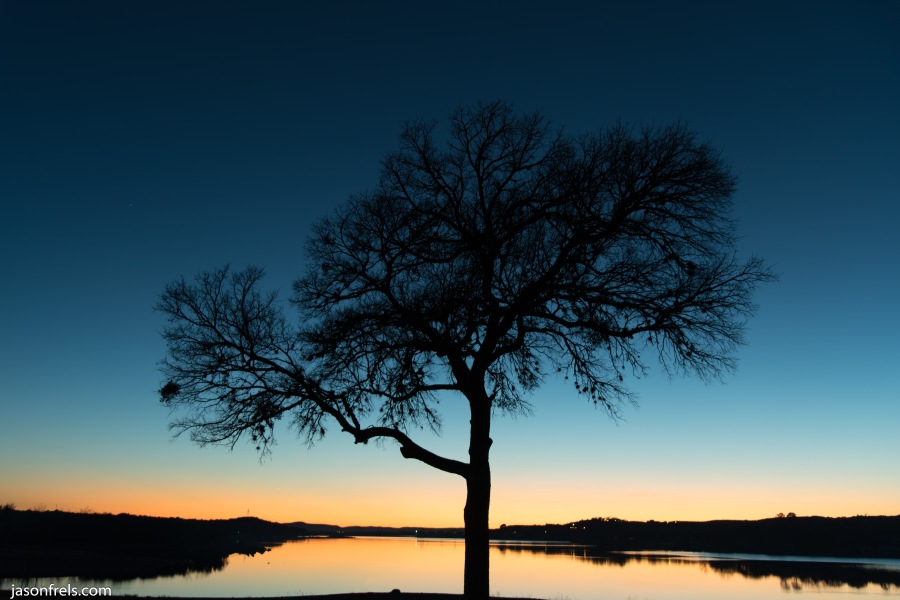 On a simplicity rating, the subject is the silhouette of a tree on a cool winter evening and there is nothing in the foreground or background to distract from that. The background is the twilight on the western horizon, which captures the moment and the mood of the scene. I think it works and was the best shot of my outing. I liked the picture so much that it is now on my computer desktop rotation.

I used a tripod with a remote shutter release using a delayed release after the mirror was up. I verified the histogram after shooting to make sure that I got it. Going back further with a long focal length would have been interesting, but I was on a hillside and there was not much more backing up available.

It is difficult in the moment to keep the notion of simplicity in mind among all of the other thoughts I have about composition and camera settings. But I tried to force myself to take that time and I think it was a big improvement for me. One good shot is better than 20 mediocre shots.